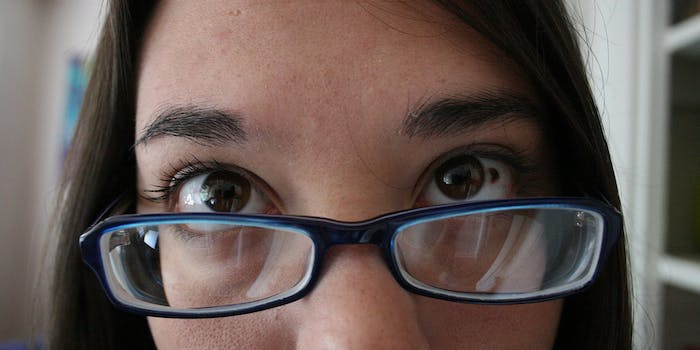 Talk nerdy to me.

Remember that Woody Allen short story “The Whore of MENSA,” about an escort agency where the prostitutes don’t have sex with their clients, but instead discuss the teleological suspension of the ethical in Kierkegaard’s “Fear and Trembling”? Well, someone on Kickstarter has come up with a real-life version of that, except it’s not an escort agency: It’s a phone sex line called SmartLine.

Created by someone who calls himself Arturo Dashan, SmartLine is modeled after an old-school phone sex line (because we all know how profitable and relevant those still are today): You call a number and pay a “small fee” of less than 50 cents a minute to have a conversation over the phone with an expert on your proposed subject. You can talk about the geopolitics of the Middle East, diagetic vs. non-diagetic sound in the early works of Ingmar Bergman, or the Smoot-Hawley Tariff Act of 1930. Whatever floats your boat.

The basic premise of SmartLine is as follows: You’re secretly brilliant, but the light of your genius is getting snuffed out by the neverending black hole that is your friends’ dumbassery, so you might as well dish out 50 cents an hour to talk to someone on your intellectual level.

“Think about how often you’ve been alone thinking about philosophy, politics, etc., but haven’t had anyone to share your ideas with,” Dashan writes. “Or even worse—you wanted to talk about your ideas with someone, but he/she either didn’t care, or was unsuitable for such a conversation.”

You might be wondering how, exactly, Dashan plans on going about finding staffers for SmartLine, who are able to speak confidently about everything from Hegelian dialectics to whether or not Ferris was real. But don’t worry, he has a plan:

The employees will be hired based on a number of factors. First we will measure their intelligence by one of three ways: Enrollment/completion of a degree at a top 10 university; an IQ score that is 130 or above; [or] an SAT/ACT score at or above the 97th percentile.

And it’s OK if you don’t fall into any one of these specific categories: “Any one of these will suffice, as we understand that there are people who are simply poor test takers, receive full scholarships from schools that aren’t in the top 10, etc.,” Dashan magnanimously adds.

Luckily, it seems like Dashan’s half-baked and elitist idea for an intellectual phone sex line won’t be coming to fruition any time soon: The project has only raised $1 of its $2,000 goal. So if you’re in the mood for some scintillating, intellectual dirty talk, you’ll have to stick to asking your wife to wear Rachel Maddow glasses while reading Chomsky’s Logical Syntax and Semantics in bed.