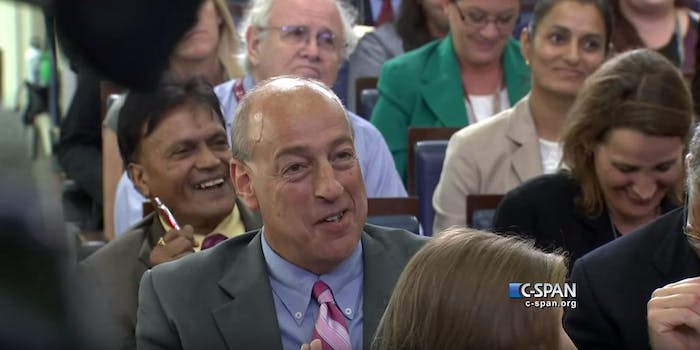 Siri is taking over America.

Apple‘s personal assistant Siri isn’t just useful for setting reminders and getting weather forecasts. As reporters at the White House learned Thursday, she’s also a no-nonsense spokeswoman for the president.

It was a typical Thursday at 1600 Pennsylvania Avenue, and the daily White House briefing was wrapping up. Josh Earnest, President Barack Obama‘s press secretary, called on the last questioner. Midway through the reporter’s question about the Iran deal, however, someone accidentally activated Siri on their phone, and the pleasant female voice emerged to confront the reporter.

The reporter took the robotic outburst in stride and continued with his question. But the incident was a reminder to the White House press corps: Silence your cellphones during the briefing!

As funny as this was, it doesn’t hold a candle to White House reporters’ ringtones accidentally going off mid-briefing, from Harry Potter to Chamillionaire to a rooster crow.