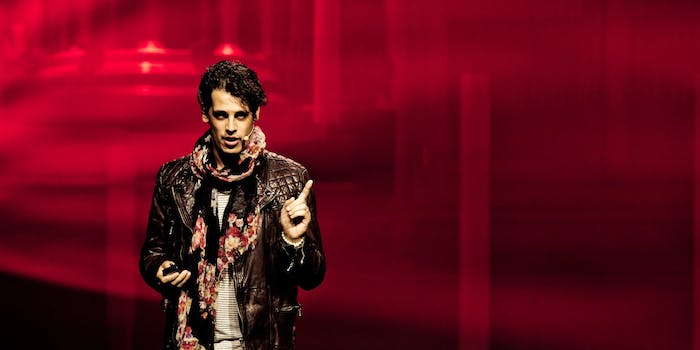 'I've gone through worse. This will not defeat me.'

“They canceled my book,” Yiannopoulos wrote on Facebook. “I’ve gone through worse,” he added in a follow-up post. “This will not defeat me.”

The book was due to hit shelves on June 13.

Representatives of Simon & Schuster or its conservative imprint Threshold Editions, through which Dangerous was to be published, did not immediately respond to requests for comment.

Branding himself as a fierce advocate for free speech and a stalwart opponent of political correctness, Yiannopoulos has become an explosive figure in the world of political commentary, sparking heated and sometimes violent protests virtually wherever he speaks due to his opinions about Muslims, women’s rights, and more.

News of Yiannopoulos’ canceled book deal comes just hours after the organizers of the Conservative Political Action Conference (CPAC), the American Conservative Union (ACU), announced they had rescinded their invitation to have Yiannopoulos, who is also a senior editor at Breitbart News, speak at the high-profile event.

“Due to the revelation of an offensive video in the past 24 hours condoning pedophilia, the American Conservative Union has decided to rescind the invitation of Milo Yiannopoulos to speak at the Conservative Political Action Conference,” Matt Schlapp, chairman of the ACU, said in a statement emailed to the Daily Dot.

A conservative group known as the Reagan Rebellion reacted to Yiannopoulos’ CPAC invitation by posting a series of video interviews in which he makes dismissive comments about pedophilia and sexual assault.

Yiannopoulos himself claims to have had sex with a priest when he was underage.

Yiannopoulos defended himself in a Facebook post on Monday, arguing that his comments were taken out of context and that he is a staunch defender of victims of child abuse.

I am a gay man, and a child abuse victim.

I would like to restate my utter disgust at adults who sexually abuse minors. I am horrified by pedophilia and I have devoted large portions of my career as a journalist to exposing child abusers. I’ve outed three of them, in fact — three more than most of my critics. And I’ve repeatedly expressed disgust at pedophilia in my feature and opinion writing. My professional record is very clear.

But I do understand that these videos, even though some of them are edited deceptively, paint a different picture.

In addition to the canceled book, the Washingtonian reports that a number of Yiannopoulos’ colleagues at Breitbart have threatened to resign if Yiannopoulos is not fired.