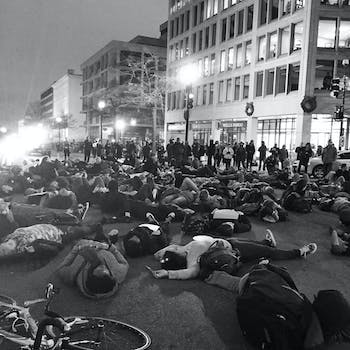 Across the United States, people shut down major thoroughfares Thursday night in reaction to no charges for the police officers who killed Eric Garner and Mike Brown.

“Shutting it down” is a evolution of the type of civil disobedience that has long lasted through decades and decades of activist history—a non-violent form of declining to obey laws or the government.

Shutting it down goes back to Ferguson, Mo., with the police shooting of unarmed teen Michael Brown in August, and their protest organizers pushing to #shutitdown.

The new age of civil disobedience really shines in a simple tweet Ferguson activists will send out from time to time. Regarding justice in the Mike Brown and Eric Garner cases, they say “if we don’t get it…”

And almost immediately, a stream of tweets will respond: “Shut it down!” 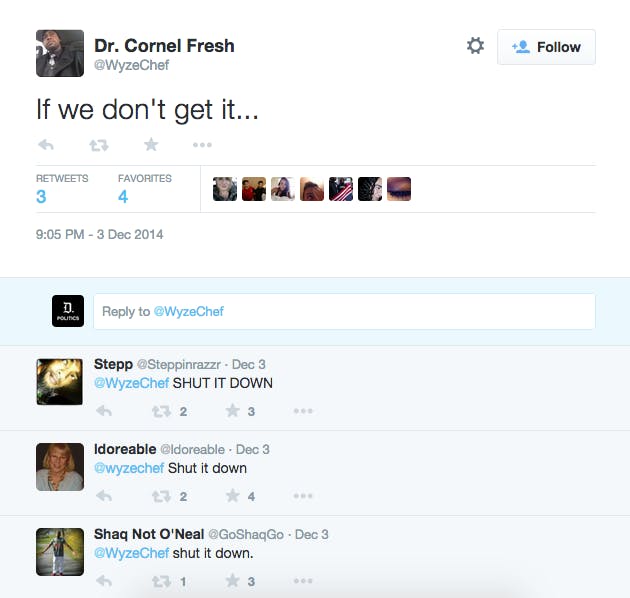 Hundreds of protesters took the Brooklyn Bridge Thursday for the second night in a row, as the chanting demonstrators skipped the designated pedestrian path and instead flooded the roadway, bringing traffic to a standstill.

Marching across a bridge is boldly challenging the risk of arrest. It can bring criminal charges by police in an arrest, including trespassing to disorderly conduct charges.

Taking the Brooklyn Bridge. Large group already ahead have shut it down. #blacklivesmatter pic.twitter.com/JUbcBmNJMU

And in Chicago, protesters marched on the major highway of Lake Shore Drive.

Hundreds marched against traffic on the freeway, bringing traffic to a halt. This protest act in stopping or interrupting the flow of traffic can result in impeding traffic charges.

We can see Lake Shore Drive from school and #BlackLivesMatter shut it down.

Our view of Lakeshore Drive pic.twitter.com/qQLvWH40pp

And they did it again in Dallas, Texas.

Boston did it, but with the T metro system, by blocking any approaching trains.

Besides marches, sit-ins or “die-ins” of laying down on the street are also other forms of “shutting it down.”

These #shutitdown protests against what they claim are aggressive and discriminatory policing also took place in Atlanta, Dallas, Oakland, Portland, San Francisco, Seattle, Washington D.C., and elsewhere. They are aimed at disrupting the status quo and bringing attention to the issues of police brutality, inequality, racial injustices in America.

But did they really shut it down? Some Google Maps photos show they may have.

Today’s civil disobedience demanding justice are being called to action and organized through electronic means. They’re then documented and mapped online through social media and sent with the #shutitdown hashtag.

SHUT IT DOWN RT @leftinmiami: We just took over the west side highway in NYC. #ShutItDown #EricGarner