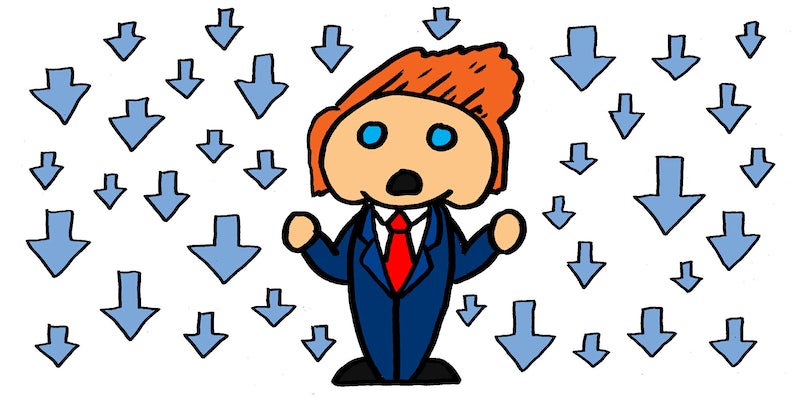 After far-right conspiracy website InfoWars and its founder Alex Jones were banned from several major social media platforms on Monday, Reddit’s community of dedicated President Donald Trump supporters leapt in defense of the outlet by mounting a campaign to have the government intervene.

While InfoWars has repeatedly been at odds with Facebook and YouTube over its content, culminating in Monday’s total ban in violation of hate speech policies, r/The_Donald has repeatedly been the subreddit at the center of this debate over at Reddit.

There is no mainstream subreddit as controversial or provocative as The_Donald, a popular right-wing forum that has made national headlines on multiple occasions for its association with the so-called alt-right.

InfoWars said on Monday that it was targeted by social media companies for its role in getting Trump elected, but during the 2016 presidential election, it was The_Donald that instigated the hyperpartisan coverage and narratives of right-wing media outlets like InfoWars.

When WikiLeaks published emails leaked from the Democratic National Committee and inbox of former Clinton campaign chairman John Podesta, for example, Reddit users on The_Donald as a community began to dig through the information dump for dirt on their political opposition.

The community also led a crowdsourced investigation into the death of Democratic staffer Seth Rich, who was gunned down as he walked home from a bar, propagating a conspiracy theory that the staffer had been killed for being behind the DNC leaks.

Despite evolving into a major hub for the sharing of conservative news and right-wing memes, however, the subreddit’s association with the far right and promotion of racism, sexism, fake news and brigading has landed it in trouble.

For many Reddit users, the community’s existence alone is proof of Reddit’s failure to enforce content policies consistent with other social media platforms and that the company is, in fact, wilfully accommodating the subreddit. Reddit’s CEO Steve Huffman hasn’t done much to refute that notion and, in fact, has repeatedly underlined his company’s commitment to free speech over policing hate.

“Hate speech is difficult to define,” Huffman wrote. “There’s a reason why it’s not really done. Additionally, we are not the thought police. It’s not the role of a private company to decide what people can and cannot say.”

Facebook, Twitter, and YouTube have very specific policies on the use of hate speech, policies that they deployed this week against InfoWars. So, while these companies establish and enforce hate speech policies, Reddit has no such policy. Huffman dismissively told Swanson that the company’s violent speech policy “effectively” dealt with hate speech, but admitted back in April to a different user that racial slurs did not violate Reddit’s rules.

“On reddit, the way in which we think about speech is to separate behavior from beliefs,” he wrote at the time. “Our approach to governance is that communities can set appropriate standards around language for themselves. Many communities have rules around speech that are more restrictive than our own, and we fully support those rules.”

Well, it appears to draw the line at its policy on content that incites violence, updated in late 2017, which is “any content that encourages, glorifies, incites, or calls for violence or physical harm against an individual or a group of people; likewise, we will also take action against content that glorifies or encourages the abuse of animals.”

This led Reddit to ban extreme communities dedicated to sharing graphic images of gore and death and those devoted to sexually obscene material. In October 2017, the company also banned far right subreddits such as r/NationalSocialism and r/Nazi before shutting down white nationalist alt-right subreddits like r/altright and r/alternativeright.

Frustrated users, however, debate that this new policy has been applied inconsistently. Even after one user presenting dozens of instances of incitement to violence on The_Donald, Reddit did not act. Those comments called for the hanging of leftists and murder of immigrants.

Ahead of the Unite the Right rally in Charlottesville, Virginia, a highlighted post encouraged users to attend and march alongside Nazi groups, even if they don’t exactly agree, because on “the pursuit of preserving … white culture, our goals happen to align.”

On another occasion an anti-Muslim post was stickied to the front page of the subreddit, blasting “the threat to western culture that is Islam.”

Trump famously retweeted a meme that had originated on The_Donald, depicting the president hitting and wrestling a CNN logo. This ignited further controversy with some on the left believing the meme advocated violence against journalists.

The list goes on, but is it likely the company will jump on the bandwagon and take action against The_Donald, as other social media companies have taken action against InfoWars?

No. Not if Huffman’s comments are anything to go by. Critics say that Reddit’s reluctance to ban The_Donald, one of its 20 most popular subreddits, is linked to the enormous amount of traffic it brings to the website and thus advertising revenue.

Huffman remains committed to the idea that it is for readers and users, not the private corporations that mediate our digital public sphere, to decide what to consume and discuss online. The longer he holds to his refusal to prohibit hate speech in defense of free speech, however, the more enraged the debate becomes on his platform.