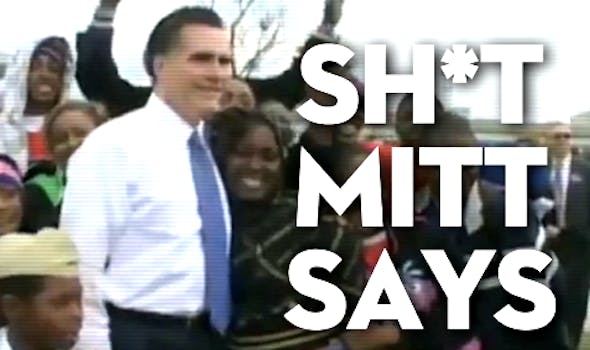 This time, Mitt Romney (and not a stand-in) really does say all of this... stuff.

Oh great, another “Sh*t ____ Says” video. But what makes this latest example interesting is who’s behind it: a Super PAC.

The vaguely-patriotic-sounding American Bridge 21st Century is jumping on the shitwagon with a mashup of quotes from Mitt Romney (the real Romney, not a dude in a Romney-suit).

The video hits on all the big Mitt criticisms: his wealth (“$10,000 bet?”), his perceived lack of compassion (“I don’t care about the very poor”), and his awkward attempts to appear “with it” (“Who let the dogs out… woof woof”).

In keeping with the rhetoric that’s been defining this election, the video focuses on Romney’s character and personality, and less on issues. One particularly cringe-worthy segment shows Romney telling the same lame joke over and over again about how he spent four years in government but “didn’t inhale.”

For those who haven’t been following the Colbert Report this year, Super PACs are committees that, thanks to a Supreme Court ruling in 2010, are allowed to raise unlimited sums from corporations, unions, and individuals. While Super PACs are forbidden to directly coordinate with candidates, American Bridge 21st Century certainly looks to have Democratic sensibilities. Each politician it claims to “monitor” comes from the Republican side of the aisle.

According to the Center for Responsible Politics, a research group that tracks campaign donations, American Bridge 21st Century has raised over $3.7 million and spent over $2.8 million of that. It makes us wonder where all that money’s going if all it takes is iMovie, a YouTube account, and a day-late knowledge of memes to make a scathing attack ad.

Can we expect more Internet memes to infiltrate this election’s TV ad spots? We’ll be on the lookout for “RickSantorumRolling,” “Trolololobama” and “Play Newt Gingrich Off, Keyboard Cat.”