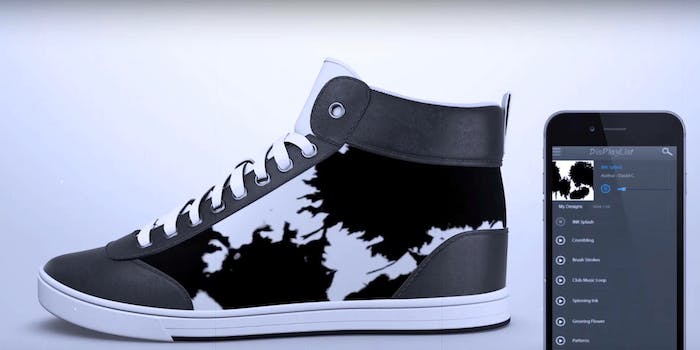 The kicks of your dreams—but they might stay there.

What ShiftWear promises in its pitch is pretty incredible—a shoe with a high-definition e-paper display that can show off any image or style that you can imagine. It does static designs, animations—anything you can design, it can display. There’s a connected app that houses an entire marketplace of designs that you can buy and use at will, making the single pair of shoes the only one you need to match any look you’re going for.

Of course, the downside of any connected technology is that it requires a charge at some point. No so with ShiftWear. Company founder David Coelho told the Daily Dot that his shoe design requires next to no energy to keep powered. “When the designs being displayed stay static, zero power is actually used,” he said.

While ShiftWear will come with a charging wire and an option for wireless charging, the real trick on display with the kicks is a new technology: walk to charge.

“A piezoelectric generator in the shoe converts the mechanical strain applied by a person into electrical energy,” Coelho explained. “The energy generated is beyond what the sneaker requires. It’s enough to even charge a cell phone battery.”

Of course the high-tech display would go to waste if it got covered in dirt and scuffs like most shoes. To combat the standard wear and tear that eventually eats away at the fashionability of your standard set of sneakers, the ShiftWear team says the shoe will be completely waterproof—so waterproof, in fact, that you’ll be able to machine wash them to keep them looking fresh.

Soles made of Kevlar fibers are said to make the shoes nearly impenetrable to daily use. Everything ShiftWear promises makes it appear like the perfect pair of shoes for anyone, especially with a variety of models ranging from low-cut sneakers to high-tops. And with a starting price of $150 for early bird backers—$50 off what the shoes are set to retail for—ShiftWear appear to be the last shoes you’ll ever need to buy.

That is, unless, they never arrive.

There’s been fear that has been floated online in discussions surrounding the sneakers that ShiftWear bears all the marks of a crowdfunding scam.

It’s already surpassed its funding goal of $25,000 on IndieGoGo with plenty of time remaining to pile on more cash, but the choice of flexible funding triggers red flags for backers. It’s a worry made worse by the fact that a goals chart on the campaign page shows that the initial mark of $25,000 doesn’t actually make the shoes a reality; it simply allows the team to “move forward with development” and complete a prototype.

While the ShiftWear team promises it can make the first batch of sneakers for its early backers, they don’t appear to come with the features that are touted so heavily in the rest of the campaign. The HD color display doesn’t come to fruition until the campaign passes $1 million; walk-to-charge technology and wireless charging won’t be available until $2 million is amassed.

Coelho explained the initial $25,000 was simply what was required to boost ShiftWear beyond the prototype phase and toward mass production. “We are still aiming to continue raising funding on our website or through IndieGoGo until we reach the $2-million mark,” he said.

Coelho said he and his team have experienced an “overwhelming response from consumers and investors alike” since the campaign began. ShiftWear claims to have backers lined up for after the crowdfunding campaign ends who will help “ensure that all of our features are feasible for mass production” and provide “extra security to this project.”

Potential backers might feel stronger about putting their money into ShiftWear if there was a prototype on display. Thus far, all depictions of the shoe have been a rendered image. The same one appears on the ShiftWear site, the IndieGoGo campaign, and the promotional YouTube video—which, while not indicative of anything, inexplicably has a cursor visible throughout, as if a render was screen captured from an editing program and then uploaded.

While it’s yet to be seen, Coelho insisted his team has made and tested a prototype. “The hardware technology has existed for years and the majority of our work involves finessing ShiftWear’s software. The updated software will allow us to tweak the current tech to give us what we need for our application,” he explained.

This is one of the biggest issues that crowdfunding presents—a group of ambitious creators get an idea in their head that is too good not to pursue. Being able to call upon the masses to make it a reality is tempting; the more people you can bring on board, the more exciting the venture becomes. But it also puts the creators on the hook for something they may find they don’t have the capabilities to deliver.

The true challenge on the table for ShiftWear is bringing everything promised together into a single package that fits on your feet and functions as promised. If Coelho and company can do that, their kicks will be well worth tossing $150 at—but assuming ShiftWear successfully makes it to store shelves and delivers on all its claims, the shoes will still be worth the extra $50 for the assurance that they actually exist.

If things fall through at any part of the process, $150 becomes a very steep price to pay for something that could leave you stuck in just your socks.