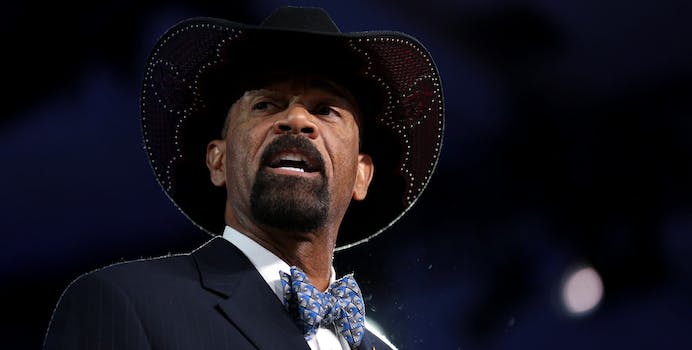 A star in conservative circles, Clarke has sparked outrage over a series of deaths at a jail his office oversees.

Milwaukee Sheriff David Clarke, a controversial political figure and conservative star, says he has accepted a position with the Department of Homeland Security, but questions remain.

Clarke on Wednesday claimed he will serve as an assistant secretary within the Office of Partnership and Engagement, where he will allegedly serve as a liaison with state and local law enforcement agencies.

However, it remains unclear whether Clarke has actually received the appointment, despite telling local media outlets that he had. According to CNN, DHS has so far refused to confirm whether Clarke received an appointment to an assistant secretary position, which does not require senate approval.

A staunch supporter of President Donald Trump who regularly appears on Fox News as the president’s surrogate, Clark rose to national prominence within conservative circles after he released a radio ad in 2013 calling on Milwaukee citizens to “consider taking a certified safety course in handling a firearm.” The ad was cheered by gun-rights advocates and fiercely opposed by proponents of gun control.

Although celebrated for his support for gun owners and conservative ideals, Clarke faced condemnation last month after a Milwaukee County Jail inmate, Terrill Thomas, was found dead of “profound dehydration” after corrections officers took away his water while he was in solitary confinement. The death was later ruled a homicide by the Milwaukee County medical examiner’s office.

Earlier this month, a jury recommended charges be brought against seven employees of the Milwaukee County Jail, which is overseen by Clarke’s office, for their alleged role in Thomas’ death.

Last year, four inmates died while imprisoned at the Milwaukee County Jail. According to the county’s chief medical examiner, Brian Peterson, Clarke “threatened” and “verbally pummeled” him in December after he made information about two deceased inmates public.

Clarke also made headlines during the 2016 presidential election for his criticism of Democratic nominee Hillary Clinton, the Black Lives Matter movement, liberals, and the media.

It's incredible that our institutions of gov, WH, Congress, DOJ, and big media are corrupt & all we do is bitch. Pitchforks and torches time pic.twitter.com/8G5G0daGVN

Clarke also came under fire for comparing former President Barack Obama to Adolf Hitler for how he managed the Department of Justice.

Speaking with local Milwaukee radio station WISN, Clarke said he is “looking forward” to joining DHS where he hopes to serve as a point of contact between the federal government and local law enforcement, whom, he said, “feel like they’re being ignored.”