The art of the mixtape gets a digital makeover

Physical media is making a comeback.

Services to make your digital belongings feel more permanent again are increasingly popular. Many of us traded out albums for downloads years ago. The convenience alone was just too convincing an argument. But there remains the novelty of music in physical form; in fact, vinyl sales increased in 2014.

Clearly music buffs want something they can hold, but the advantages of digital (like sharing and music discovery) are tough to sacrifice.

There are countless ways to make and share playlists online, most notably with Spotify, and sites like Retrojam will even generate them for you.  But none of those options are as tangible as old-school mixes.

Tactify wants to bridge this gap by bringing back the mixtape—but with an added flair of modernity so you won’t have to run out to the nearest Goodwill and find a cassette deck. Sharetapes are physical cards, no bigger than a credit card, with a retro cassette skin. Users can fill the card with content by creating a playlist of digital music that can then be listed to online

“Sharetapes isn’t necessarily the most efficient way to share a playlist, but I think we could say it’s the most romantic!”

“We were all big mixtape guys growing up,” Sharetapes cofounder Richard Dupe told the Daily Dot. “It’s a lot of fun making a playlist for a road trip, or someone’s party. Most occasions could probably be improved at least by some degree if someone had planned out a bunch of music beforehand. It’s a cool way to discover music through people you know.

“When you’re in a situation where you can type the name of basically any song that ever existed into one tiny device in your pocket, music discovery has shifted further afield from people you know to people whose Internet content you read, which is also cool, but mixtapes will always be important!”

Filling a Sharetape with music requires the mixtape maker to build a playlist in Spotify, Pandora, 8Tracks, or YouTube. The playlist is added via the Sharetapes website by hitting the “record” button, which prompts the user to link the content to the unique ID code on the tape.

It’s not quite the thrill of sitting in front of the radio with a cassette loaded in, waiting for the song to start to hit record, but it does bring back the bygone ritual of physically sharing music. 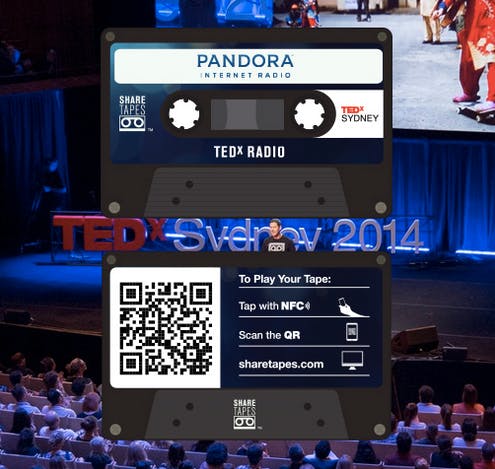 “Sharetapes isn’t necessarily the most efficient way to share a playlist,” Dupe admitted, “but I think we could say it’s the most romantic!”

Dupe believes that by migrating music entirely to the digital realm, it’s lost some of its perceived value. “In the late ’90s everyone’s first go-to-gift was a CD. If it was your friend’s birthday, you got them a CD; if you didn’t have any money you made them a mixtape (or CD), and I think people discovered a lot of their music that way. Sharetapes is trying to bring back a little of that magic for the age of smartphones.”

In this age of drag-and-drop playlists and instant mixes, Sharetapes requires a forgotten level of thoughtfulness. As High Fidelity taught us, the making of a great compilation tape is hard to do. Just because you can access every artist’s library from the annals of music history at will doesn’t mean you know how to use it. (Refer to the rules of mixtapes should you find yourself needing guidance.)

For the recipient of a Sharetape, they can pop in their earbuds and immediately checkout the set list by tapping the card with their NFC-capable phone, scanning the QR code on the back of the card, or by entering the card’s code on the Sharetape website.

And just like you can make a mixtape for any occasion, Sharetapes can be customized. “We have been doing a lot of custom work with brands and artists, trying out all kinds of things,” Dupe said. 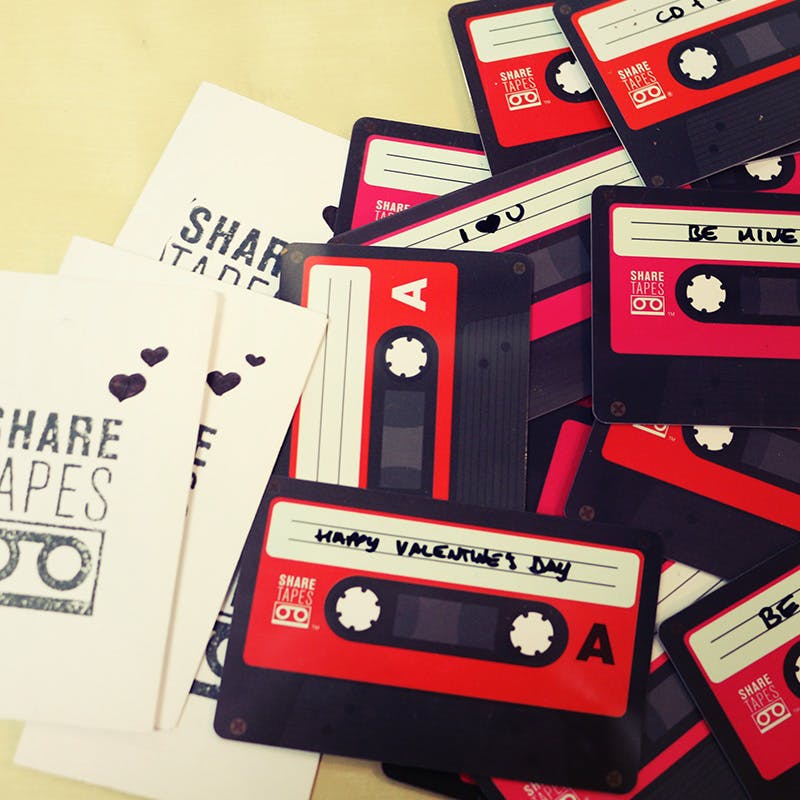 Custom prints can be created to make the outer label of the Sharetapes reflect the awaiting mix, or you do your own personalization with a Sharpie.

More important than what’s on the label is what’s waiting on the card. “People have been using [Sharetapes] in some really cool ways,” Dupe said. “One of our favorites was a wedding who ordered Sharetapes and had everyone suggest songs for the evening in advance, which they played on the night and gave everyone a Sharetape with the playlist to take home.”

Try pulling that off with iTunes alone.