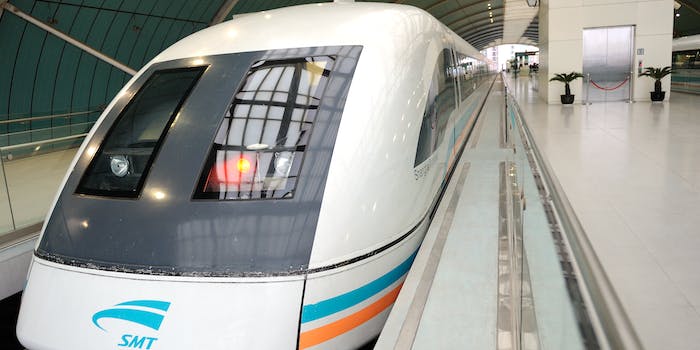 Just imagine the shock, being aboard that train...

Don’t blink. Seriously, don’t blink—if you do, you’ll miss the fraction of a second it takes for these two Maglev trains to pass each other.

On Saturday, YouTube account TheBearPoncho posted a 31-second video of two Shanghai Maglev trains passing each other. Named after electromagnetic levitation used to frictionlessly propel the trains at high rates of speed, the Maglev train that the video recorded from was traveling at 267 mph at the time of the passing, the YouTuber wrote. That means, if the other train was going the same speed, the passengers would have witnessed the other train passing at about 534 mph, accounting for the space between the two trains.

Regardless, the second train passes by in a surprising flash, leaving passengers gasping and laughing at just how frighteningly fast the other Maglev came and went. The video also slows down and plays back the moment the train passed—not that it makes it much easier to make out the blurred train.