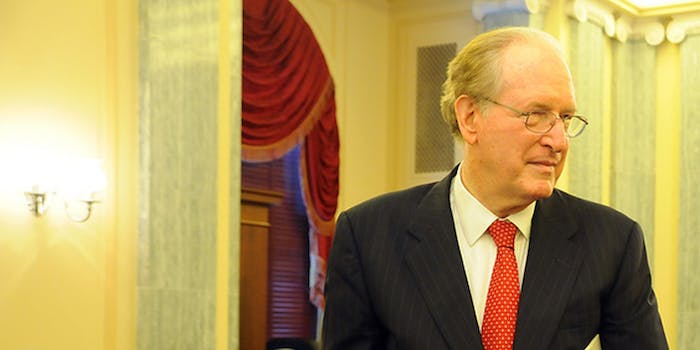 Well this is enormously unfair. You might even say it.sucks. Sen. Jay Rockefeller, a Democrat out of West Virginia, is fighting requests to add a “.sucks” domain to the Internet.

Recently, a host of sometimes weird generic top-level domains, or gTLDs, expanded the Web beyond the familiar set of URL suffixes. As soon as a few were rolled out, the Daily Dot itself rushed to buy property in the brand-new “.photos,” “.guitars,” and “.sexy” territories.

It may seem natural, then, to add .sucks, and three companies — Donuts Inc., Momentous Corp., and Top Level Spectrum — have applied for the gTLD, Rockefeller complained in a letter to the Internet Corporation for Assigned Names and Numbers. “I view it as little more than a predatory shakedown scheme,” he wrote, arguing that businesses and individuals could be forced “to pay ongoing fees to prevent seeing the phrase ‘sucks’ appended to their names on the Internet.”

Rockefeller then issued a rhetorical threat in order to make his point.

“[W]ill your organization allow a third party to purchase and operate ‘ICANN.sucks’?” he asked. Interesting hypothetical, but ICANN will only suck if they don’t approve the .sucks domain in the first place, so it’s really a moot point. And while Rockefeller may feel the word “sucks” has “little or no socially redeeming value,” proponents insist it will “foster debate and benefit consumers.”

Photo by SenRockefeller/Flickr  (CC BY 2.0)