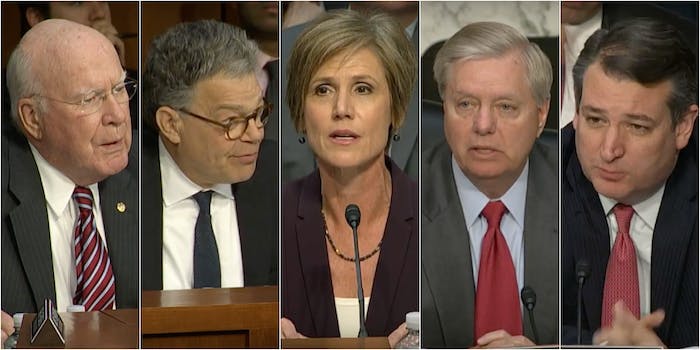 Republicans asked nearly as many questions about Sally Yates' travel ban objection as they did about Russia.

During the hearing, which was officially titled “Russian Interference in the 2016 United States Election,” members of Congress grilled former Director of National Intelligence James Clapper and former acting Attorney General Sally Yates on a range of topics. But a Daily Dot analysis of the hearing’s transcript found that less than half (48.5 percent) of all questions were related to Russia.

Of the 133 questions put forward by Republicans on the panel, less than a third related to Russia’s election meddling or Trump administration officials’ contact with Moscow. More than two-thirds of Democrats’ questions pertained to Russia.

The subcommittee’s Republican members were equally as concerned about leaks to the media and the “unmasking” of Americans in foreign intelligence data than the idea that the country’s democratic process had been compromised by a foreign power. All in all, a mere 28 percent of their questions dealt with Russia while a further 28 percent challenged leaks and rules around declassifying information.

In addition to questions about leaks and unmasking, Republicans asked nearly as many questions (34 questions) about Yates’ refusal to enforce President Donald Trump’s travel ban executive order than they did about Russian election interference. Twenty-six percent of questions Republicans posed challenged Yates’ on the incident, which led Trump to fire her. Questions about the travel ban incident made up just 9 percent of Democrats’ inquiries.

Democrats notably less concerned with chasing clarification on Yates’ travel ban stand-off at Monday’s hearing, asking less than half as many questions as their Republican counterparts on that matter. Nor were Democrats as interested in how leaks or the unmasking of U.S. citizens happened, questions on those issues make up less than 10 percent of all Democrat questions through the session.

Rather Democrats were primarily concerned with the details of Yates’ contact with White House officials regarding her warnings about former National Security Adviser Michael Flynn‘s failure to be honest about his contacts with Russian officials. Flynn was forced to resign on Feb. 13, the same day the Washington Post revealed that Yates had warned the White House that Flynn misled Vice President Mike Pence regarding his call with Russian Ambassador Sergey Kislyak. Yates testified that she first notified the White House that Flynn had lied—and that Russia knew he’d lied, making one of American’s highest ranking intelligence officials vulnerable to blackmail—18 days before he was ejected from the Trump administration.

In total, 66 percent of Democrats’ questions related to Russia or Flynn.

Regarding the leak that allowed the Washington Post to expose Flynn’s contact with Kislyak, Democratic Sen. Richard Blumenthal of Connecticut pointed out that “without the free press telling us a lot of what went on, Michael Flynn might still be sitting in the White House as national security adviser, because by January 30th, [Yates was] forced to resign. … So nobody was around to tell the White House … that our national security was in danger.”

Despite Sen. Lindsey Graham’s (R-S.C.) conclusion that there is a “bipartisan consensus” on Russian meddling, a glance at the data from Monday’s hearing reveals that both parties have very different ideas about what comes next.