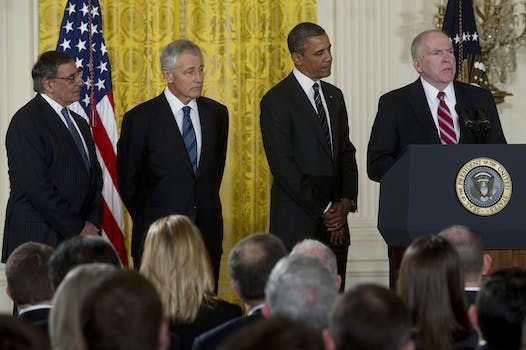 'In our judgment your handling of this matter has undermined that confidence.'

CIA Director John Brennan lied when he denied ordering agency employees to search Senate computers to trace a leak. Frustrated with his unwillingness to admit the obvious, three Senate Democrats on Friday called on Brennan to admit that his agency crossed the line.

The Senate Intelligence Committee was preparing a report on the CIA’s Bush-era torture programs when the spy agency discovered that the committee had somehow acquired an internal CIA report on the program. To determine how the report had leaked, Brennan ordered CIA officers to pry into the computers used by committee staffers.

Brennan initially denied accusations of hacking, but an investigation by the CIA’s inspector general showed his denial to be false. The CIA set up an outside review board chaired by former Sen. Evan Bayh (D-Ind.), but the board’s final report did not recommend any punishments for the employees who hacked into the Senate’s computer system.

Brennan has not acknowledged any misconduct by CIA employees in the matter.

“It is vitally important for the American public to have confidence that senior intelligence officials respect U.S. laws and the Constitution, including our democratic system of checks and balances,” reads the letter from Sens. Ron Wyden (D-Ore.), Martin Heinrich (D-N.M.), and Mazie Hirono (D-Hawaii).

“In our judgment your handling of this matter has undermined that confidence,” the letter continues. “We call on you to acknowledge that this search was improper, and commit that these unacceptable actions will not be repeated.”

The letter from three of the Senate’s top privacy hawks is likely as far as the senators can go to confront Brennan. The Intelligence Committee could subpoena Brennan and compel him to testify, but it would take a majority vote by the committee to do that. An aide to an Intelligence Committee senator told the Daily Dot, “It is unlikely there are the votes to make that happen, given the chairman’s stance on this.”

The committee’s chairman, Sen. Richard Burr (R-N.C.), has shown no interest in continuing the crusade against Brennan launched by his predecessor, Sen. Dianne Feinstein (D-Calif.).

In an interview with the Daily Dot earlier this year, Wyden said that he did not have confidence in Brennan’s leadership of the CIA.

“If a 19-year-old had done what the CIA did, in terms of hacking into the Senate’s files, the 19-year-old would be in jail today,” Wyden said. “I continue to have concerns about what I call the culture of misinformation that is part of the leadership of the intelligence community.”

“While he now concedes the search did take place,” Wyden’s office said in a statement, “Director Brennan has yet to acknowledge that the search was improper, or committed to never again performing such a search.”

Read the full letter to Brennan below.