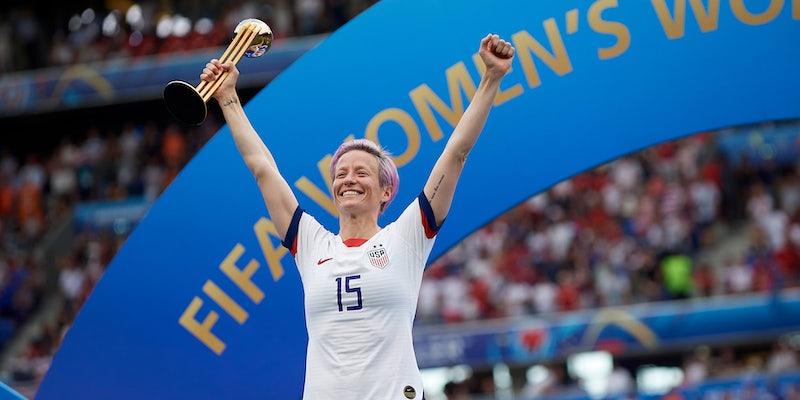 West Virginians are surprised as the rest of us

West Virginia is known for many things. Taking a stand on soccer isn’t one of them. But maybe now it should be.

In a move that harkens back to the state’s coal wars when exploited workers rose up against coal companies, Senator Joe Manchin (D-W.Va.) has proposed a bill that would withhold all funding from the 2026 World Cup until the U.S. Women’s National Team (USWNT) is paid the same as the men, who currently stand to make more than three times as much per game.

The @USWNT is the best in the world and deserves to be paid accordingly. #PayTheWomen pic.twitter.com/adKmey8HzX

The USWNT has attracted global support for its pursuit of equality. Minutes after they bested the Netherlands in the final, the crowd erupted into chants of “equal pay, equal pay!”

Manchin’s bill would withhold federal funds from “host cities; participating local and state organizations; the U.S. Soccer Federation, Confederation of North, Central American and Caribbean Association Football (CONCACAF), and Fédération Internationale de Football Association (FIFA)” for the 2026 Women’s World Cup, which is being co-hosted by the U.S. and Mexico.

In a statement, Manchin said it was “just plain wrong” and “unacceptable” that the women were receiving unequal compensation.

“They are the best in the world and deserve to be paid accordingly. I’m encouraging everyone to call their Senator and Representatives to help us get this bill passed and finally create a level playing field for all,” the senator added.

The Mountain State representative explained that he was inspired to file the bill by a letter from West Virginia University women’s soccer coach Nikki Izzo-Brown.

In her letter asking for the senator’s support, Izzo-Brown pointed out that the injustice is heightened by the fact that women have bested the men in titles, revenue, and viewership. (Also memes.)

“The inequality of pay is unjust and this wage gap with the US men’s national team has to stop,” the coach wrote, “…I believe firsthand, it is wrong for the US Soccer women to be paid and valued less for their work because of gender.”

In the shadows of USWNT’s perseverance both on the field and in its demand of equal pay, some criticisms have lurked.

Nevertheless, much of America has greeted its returning champs with open arms and, like Manchin, support for their demand for gender equality. Today the returning champs sipped champagne and danced on a float during their welcome home parade in New York City.

And they got a shoutout from a former president.

Proud to rep America’s best team! Congrats @USWNT and thanks for being such a strong inspiration for women and girls—and everybody—all across the country. pic.twitter.com/9Gp6UTZhEE

Girls of all ages EVERYWHERE. So awesome to see the excitement and joy on their faces as the ticker tape reigned down. Thank you, Team USA! #WNTParade #GirlPower #USWNT pic.twitter.com/eP4toBkZCS

Bravo @USWNT !!! You're all #WomenOfWonder I feel your inspiring and heroic win is a true game-changer, an opportunity to make a real difference in women equality, for all of us around the world, women of today and women of tomorrow. Thank you gals! pic.twitter.com/t46GdchOH7

The battle for gender equality might not be over, but it’s safe to say the USWNT won’t want for invitations any time soon.