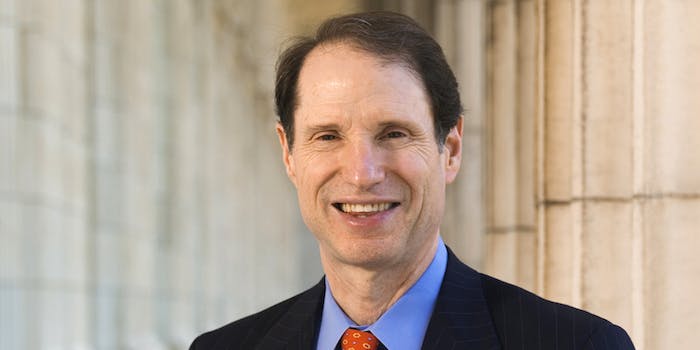 Sen. Wyden's letter is critical of the FBI's new policy, claiming it may place an 'unnecessary burden' on FOIA requesters.

The Federal Bureau of Investigation’s decision to stop responding to the public’s requests for agency records by email garnered widespread disapproval this week from journalists and freedom of information advocates.

Now, a member of the Senate Select Committee on Intelligence is asking the FBI to reconsider its plan.

For years, the nation’s top law enforcement agency has allowed the public to request access to government documents via email under the Freedom of Information Act (FOIA)—a federal law whose underlying purpose is to combat government secrecy. Beginning on March 1, however, the FBI is shutting down its email account, directing solicitants instead to one of three other avenues for submission: a web portal, a fax machine, or standard mail.

In a letter on Friday, Sen. Ron Wyden, a Democrat from Oregon, urged the FBI to revise its new policy, which he interpreted as potentially placing an “unnecessary burden” on requesters, citing limitations of the FBI’s new online submission platform.

“While it is admirable that the FBI has sought to make it easier to receive and process FOIA requests,” wrote Wyden, “there are a number of limitations with the online portal. These limitations may become serious problems if this system is to be the sole method through which the agency can receive digital FOIA requests.”

Signed into law by President Lyndon B. Johnson, FOIA was created to ensure an informed citizenry and hold the governors accountable to the governed, to paraphrase a 1978 Supreme Court opinion. While often touted as a rare impediment to arbitrary government secrecy, FOIA has suffered over decades from weak enforcement and outright evasion on the part of some federal agencies.

Among frequent FOIA filers, the FBI is recognized as a notorious violator of the law, often taking months or even years to respond to the simplest of requests. In truth, FOIA veterans often dissuade budding reporters from seeking time-sensitive documents from the FBI, unless they’re willing, and financial able, to sue the agency in court.

The FBI’s decision to preclude email requests was first observed by FOIA researcher and journalist Michael Best, the author of numerous articles based on responsive FOIA records at MuckRock, an online service that since its founding in 2010 has helped members file more than 28,000 such requests. Best was directed by a letter from the FBI to the new online portal—known as “eFOIPA”—which also facilitates the dissemination of records subject to the 1974 Privacy Act.

A terms-of-service agreement on the FBI’s eFOIPA portal contains a number of extra-legal restrictions not previously imposed on its email-based system. For instance, the terms state: “Not all requests can be fulfilled using the eFOIPA system.” The list of acceptable requests—those related to ”events, organization, first party requests (Privacy Act requests), and deceased individuals”—appears to exclude the often sought intra-agency correspondence of FBI employees, including emails.

“Taken together, this change in policy may place an unnecessary burden on those requesters…”

“It is unclear whether the online FOIA system can be used to request internal FBI communications, such as memos, emails, guidance, or a wide range of other important internal agency records,” reads Wyden’s letter, which asks the FBI to update its terms of service to “permit explicitly” all types of requests through its portal.

The submission form also requires solicitants to relinquish, upfront, a bevy of personal details, including their full name, physical address, phone number, and country of origin, information which was never required by email. The federal statute, after all, offers few limits on who can request documents under FOIA. The FBI is required to fork over records to virtually anyone, including non-U.S. citizens. (As of 2003, intelligence agencies are precluded from disclosing records to foreign government officials.)

“Because both U.S. citizens and foreign nationals can invoke FOIA’s right of access regardless of their geographic location, it is not clear why the FBI is requesting this information,” Wyden’s letter reads. Because first-party requests under the Privacy Act are limited to U.S. citizens, however, Wyden has asked that the FBI modify its FOIA portal to account for the contrasting requirements.

The senator was also critical of the FBI for employing a CAPTCHA system—“a program or system intended to distinguish human from machine input”—labeling the feature an “unnecessary barrier for researchers and journalists engaged in the innovative use of technology.” The FBI should be “facilitating and encouraging such innovative projects,” he said, further asking the agency to explain “under what legal authority” it plans to limit automated submissions.

In addition, Wyden asked the FBI to explain its rationale for limiting the text of digital requests to 3,000 characters: “While that may be sufficient for simple requests,” he wrote, “it may not be sufficient for those who need to explain why they are seeking the relevant records.” It is not uncommon for experienced FOIA requesters to compose lengthy letters—particularly when they anticipate escalating the request before a judge. If the limit stands, the only recourse for such complex requests would, by default, be submission through fax or standard mail.

“Taken together, this change in policy may place an unnecessary burden on those requesters who must now send requests to the FBI by fax or letter and may, counter-intuitively, create unnecessary work for the FBI, as the agency’s FOIA team will then have to perform manual data entry of text that would have previously been emailed to the agency,” Wyden concluded.

After the Daily Dot broke the news of the FBI’s new policy on Monday, an agency spokesperson said its terms of service would be modified to account for some of the issues upon rollout. For example, the limit on the types of records that can be requested online will be lifted, they said. And the prerequisite to submit some personal information, such as phone numbers, will become voluntary. A rule that states that solicitants are “limited to making one request per day and one request per submission” will also be lifted, as will the portal’s “operating hours.”

“The FBI eFOIA portal has been under development and testing for two years,” the FBI said. “With the full implementation of the portal on March 1, 2017, the terms of service for the site will be modified to allow an unlimited number of requests, no limitation on the number of requests which may be submitted by an individual, and availability seven days a week, 24 hours a day.”

Despite the loosening of these restrictions, however, press organizations and freedom-of-information enthusiasts remain critical of the FBI’s decision to abandon email.

“I don’t think that it’s helpful to the public, or the press, for the email address for submitting FOIA requests to be removed,” said Adam Marshall, an attorney at the Reporters Committee for Freedom of the Press. “I think it is the most ubiquitous form of communication, and the government should be doing everything it can to make it easier for people to request information—not harder.”

Read Sen. Wyden’s letter to the FBI below: