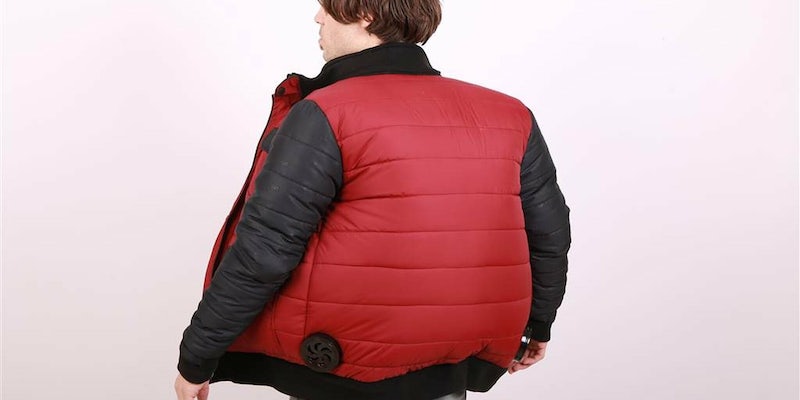 Rainy days are a drag, but you don’t have to worry about the residual effects of the weather if you buy a new jacket that dries itself.

Meet the SDJ-01, the latest in Back to the Future II-inspired apparel that insists on building the world that the movie promised us. It’s not an exact replica, but it’ll get the job done—and you sure won’t be one to complain when the jacket is keeping you dry.

“Of course we can’t deny Back To The Future had a huge impact on our decision to pursue this wearable tech now, just like it influenced Nike and their self-lacing shoes or the various hoverboard makers,” Aaron Coleman, lead designer at jacket maker Falyon Wearable Tech, told the Daily Dot.

But there’s more to the jacket than just the Marty McFly factor. “Once we really delved into the project and got to know the wearable tech scene,” he said, “we began to feel that it’s really stunning the kinds of things people are doing with wearable tech these days.”

In case you haven’t deciphered the coat’s coded name, “SDJ” stands for “self-drying jacket.” To live up to that title, the team at Falyon used air amplifiers, which Coleman described as “lightweight but powerful modified fans” mounted on the jacket. The fans weigh about 4 ounces each—less than an iPhone—to keep the garment from being weighed down.

The air amplifiers, once activated by a power button near the bottom of the zipper, suck air into the jacket and circulate it throughout the garment. “Since the air only escapes in small quantities, this means the jacket gets maximum exposure to high pressure, high flow air currents, and it dries from the inside out,” Coleman said. Exhaust vents along the neckline release the air—and blast the wearer with a refreshing, continuous breeze.

The material used to make the jacket was also chosen for its water resistance and quick drying ability.

To power the fans that keep the dampness from setting in, the jacket stashes a rechargeable power cell in an interior pocket. It provides enough power to keep the fans running for up to 30 minutes and can be recharged inside or outside of the jacket.

The team at Falyon seem quite confident that their jacket will do its job—so much so, in fact, that they’ve built in pockets for your smartphone, tablet, and other devices that you wouldn’t want getting wet. You’d best hope that the jacket does its job or you’ll need a whole lot of rice.

Falyon’s lab tests show that the jacket “consistently experienced noticeable drying effects after just 30 seconds, with the average time of about a minute to achieve 90 percent drying effect.”

While the self-drying jacket does technically exist—fulfilling the prophecy of Back to the Future II—it’s not on store shelves yet. Falyon is crowdfunding the product on Kickstarter. The company wants to raise $12,000, enough to meet the minimum requirements for factory production.

If Falyon passes that goal, you might someday see a SDJ-01 on a store shelf. Coleman said that the goal is to sell the jacket for $189—and if it’s successful, it won’t be Falyon’s last piece of futuristic apparel.

“We are already dreaming up new and exciting features for the next version, the SDJ-02,” he said. “Just to give you an idea, we have taken to calling the SDJ-02 the ‘Iron Man‘ jacket. Make of that what you will!”