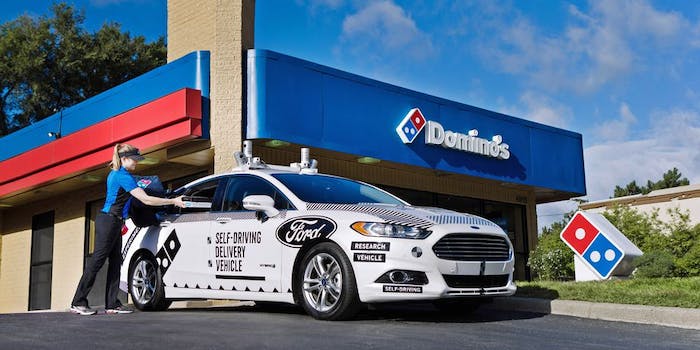 The future of self-driving cars is pizza delivery, apparently.

Domino’s and Ford are partnering up for a test run of self-driving pizza delivery vehicles in Michigan. The pilot will be an important test in seeing how customers react to self-driving vehicles, and how the future of food delivery should look.

Kicking off exclusively in Ann Arbor, Domino’s will randomly select customers to try out the new delivery method. Once selected, customers will then have the chance to opt in to autonomous vehicle deliveries (just in case they’re uncomfortable with the idea of self-driving pizza delivery, we assume). In fact the Ford Fusion Hybrid Autonomous Cars being used in the test will not be unmanned. A Ford safety engineer will be behind the wheel, as well as other researchers.

If they agree to participate, customers will then be able to track their delivery vehicle’s progress with an upgraded version of the Domino’s Tracker app. They’ll get text message alerts as the self-driving car approaches their home, along with instructions for how to retrieve their pizza. Being an autonomous car, however, there won’t be a human delivery driver who brings the pizza to your doorstep. Instead, pizza fiends will need to step outside their house and use a unique code to unlock the Domino’s Heatwave Compartment to grab their order. This compartment keeps the pizza warm during its autonomous journey.

“We’ve been watching the development of self-driving vehicles with great interest as we believe transportation is undergoing fundamental, dramatic change,” Domino’s president and CEO Patrick Doyle said in a statement. “This is the first step in an ongoing process of testing that we plan to undertake with Ford.”

The biggest questions lie in the last 50 feet of the delivery experience, according to Domino’s USA President Russell Weiner. The touchscreen interface on the car needs to be clear, for example. (That’s what customers will use to retrieve their pizza.) And Domino’s is curious how customers will react to having to leave their home to grab their pizza from outside. Perhaps it’d be better if Domino’s will have to combine its self-driving vehicle with its delivery robot, too. The company may also have to adjust the delivery flow depending on whether the car parks in a driveway or along a street curb—and what happens if there isn’t any street parking available nearby?

These questions answered, and more, as the test run starts over the next few weeks.