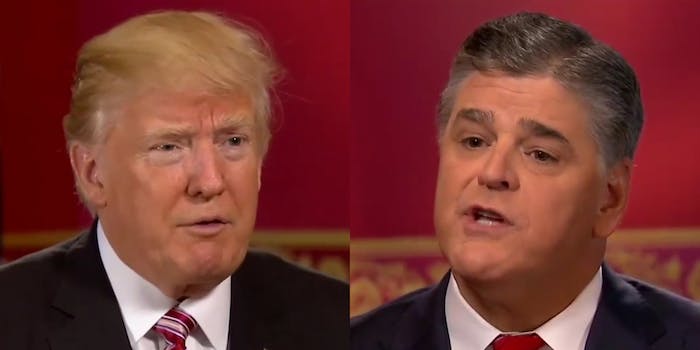 He goes after an old enemy.

CNN reported Friday night that a federal grand jury has approved the first charges in the Robert Mueller investigation of Donald Trump and Russia. Though it’s unclear who’s been charged with what—they’re under seal on the orders of a federal judge—CNN reported that people could be taken into custody as soon as Monday.

The news immediately went viral on the internet and on the cable news shows late Friday night with speculation about what it all means. If you tuned into Fox News or logged on Sean Hannity’s Twitter account to hear their analysis, though, you got something completely different.

And the old standby attack.

The Uranium One attack on Hillary Clinton has been a conservative talking point in the last several days after a report from the Hill wrote about the Clinton Foundation’s possible ties to a uranium deal between the U.S. and Russia in 2010 and how the FBI uncovered the plot. That’s also led conservative voices to assert that Mueller should resign from the investigation or that Trump would be justified in firing him.

But now that the news about charges in the Mueller investigation has been reported, some on Twitter had interesting questions about the conservative media’s latest obsession.

Boy it’s almost as if some people knew this was coming so they tried to pour chum in the water to make it dank and murky https://t.co/kWRR8a9Mpc

There has been a campaign out of the WH to discredit the Mueller investigation, but now the special counsel may be turning up the heat. https://t.co/UkhFERiVm7

"Republicans barfing up crazy shit about Hillary" is officially the best early-warning system for actual news about Mueller's investigation.

I, for one, think all of these people saying Mueller should resign or get fired were just COINCIDENCES!pic.twitter.com/hS8vktgVxx

In a tweet from Friday, it’s apparent Trump agrees with his conservative cohorts.

It is now commonly agreed, after many months of COSTLY looking, that there was NO collusion between Russia and Trump. Was collusion with HC!

As of this writing on Saturday morning, though, Trump has not commented on the possible Mueller charges.