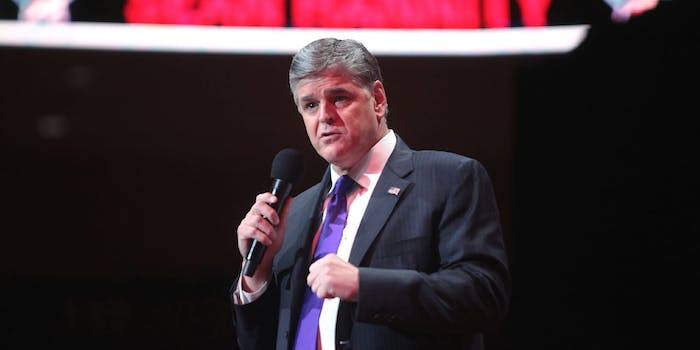 Remember the 'lock her up!' chants?

On Wednesday, Politico reported that Pelosi pushed back at House Judiciary Committee Chairman Jerry Nadler (D-N.Y.) when he asked her to support the House of Representatives starting impeachment proceedings against Trump. Pelosi, according to the report, told Nadler that she didn’t want to see Trump impeached, but rather she wanted to “see him in prison.”

This news didn’t sit well with Hannity, who consistently defends the president on his show. He said the idea of a political opponent being sent to jail was what happens in “Banana Republics” and was “beyond despicable behavior.”

Sean Hannity on Nancy Pelosi saying she wants Trump in prison: "A political opponent locked up in prison? That happens in banana republics" https://t.co/jQ04s7Qj5m pic.twitter.com/wwWvEFdqs8

“Speaker Pelosi now apparently telling senior Democrats that she’d like to see Trump behind bars,” he said. “Based on no actual crimes, she wants a political opponent locked up in prison? That happens in banana republics–beyond despicable behavior. And by the way, they would literally turn, in many ways, the USA into a country we no longer recognize.”

Of course, Hannity is well aware of recent instances of politicians calling for their opponents to be sent to prison.

Trump repeatedly used “Lock her up!” as a rallying cry during the 2016 presidential election, referring to former Democratic presidential candidate Hillary Clinton.

In November, Hannity appeared on stage at a rally with the president. At that rally, the president’s fans unleashed a “Lock her up” chant.

He had no vocal criticism of the president’s behavior then.