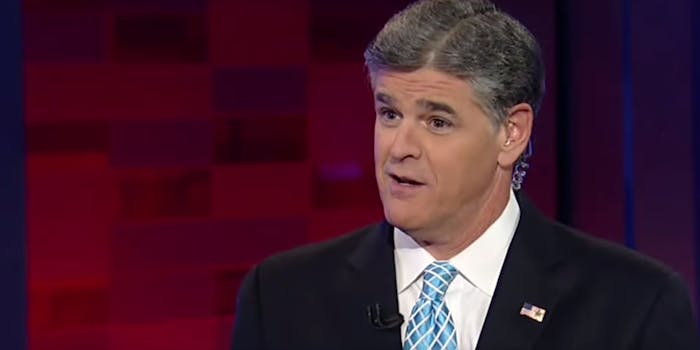 On Monday, conservative talk show host Sean Hannity sent out a series of promotional tweets about Blackphone, a new smartphone designed to allow its users to communicate securely without worrying about whether their conversations are being intercepted by third-party snoops, be they government or otherwise.

I’ve been telling you about Silent Circle’s privacy apps- Blackphone is their first device! http://t.co/D9t9IsJWMq #ad

Blackphone is THE 21st century smartphone to keep your mobile calls and texts private and secure! Get yours now! http://t.co/D9t9IsJWMq #ad

Privacy is your right… not a privilege. Get your Blackphone from Silent Circle now! http://t.co/ob0MhnRuKM #ad

There’s even a full page on the website of Silent Circle, the encrypted communications company behind Blackphone, trumpeting Hannity’s endorsement:


Now, you might be thinking that this business partnership is a strange fit—and it is. But it also provides us with a chance to learn where the middle ground is on domestic surveillance issues, and use that to make America better.

Hannity’s status as a paid pitchman for a phone explicitly designed to be as “NSA-proof” as possible falls well inside his wheelhouse. The Fox News host has spent years railing against the government’s seemingly omnipresent digital surveillance system. And late last month, Hannity interviewed Silent Circle CEO Mike Janke on his radio show and, according to company Chief Revenue Officer Vic Hyder, Hannity himself is actually using the phone on a regular basis

Thing is, Hannity wasn’t always such a staunch civil libertarian.

For most of the 2000s, Hannity was a vocal supporter of allowing the U.S. government to do virtually whatever was necessary to protect Americans from looming post-9/11 specter of terrorism. It was almost as if there was a singular event—possibly one taking place on November 4, 2008—that could explain Hannity’s 180-degree spin on the issue.

This video from left-leaning media watchdog Media Matters demonstrates how extreme Hannity’s flip-flop on privacy was the moment someone with a ?D” after his name started measuring for new drapes in the Oval Office:

While it’s easy to mock Hannity for blatantly taking whichever side of the privacy debate happens to be politically expedient, his willingness to vacillate back and forth on either side of the issue offers a crucial lesson on how people tend to view the issue of government surveillance.

Hannity was comfortable with the government’s ability to conduct virtually limitless amounts of domestic spying when he trusted the people in charge of the country’s intelligence agencies. When that executive branch leadership changed, those agencies suddenly had an agenda, one with a distinctly more nefarious character.

Hannity is far from alone in holding into this mindset.

In a 2006 Washington Post/ABC News poll, significantly more Democrats than Republicans said they were concerned about privacy implications of the government’s surveillance programs. A similar poll conducted earlier this year by USA Today/Pew Research Center, however, found stronger antipathy to domestic spying programs across the board, likely thanks to the revelations of former NSA contractor and whistleblower Edward Snowden. It also showed that more Republicans now hold serious objections to domestic surveillance than Democrats.

If a Republican manages to take the White House from the presumptive Ready For Hillary machine in 2016, those numbers will likely switch yet again—barring a successful run by libertarian Sen. Rand Paul (R – Ky.) on an anti-NSA platform.

The takeaway here is that, when it comes to questions of whether a governmental program is warranted, especially when it comes to ones in the realms of intelligence gathering or law enforcement, it’s best to take the long view—one that keeps in mind that the U.S. holds presidental elections every four years.

Close your eyes and picture the politician you most viscerally dislike, one that at least has even a sliver of a shot at taking the White House. Then image that person being in charge of guiding the vast intelligence apparatus of the U.S. government. Now, seriously ask yourself if you could support the program. Conversely, if there’s a program being enacted by a politician you hate, imagine would it could be like if that program were run by one you admire—or at least happily tolerate.

In most cases the answer should still be same. But, in a some instances, it will probably change. And without that sort of deliberate reflection, your political calculus will turn out just as cravenly short-sighted as Hannity’s.

Still, there’s a silver lining to our collective partisan hypocrisy: The issues that Hannity and cable news talking heads flip-flop on are precisely the ones where bipartisan agreement is possible—and domestic surviellance and privacy rights sit at the top of the pile.

In the end, it seems that both Democrats and Republicans can get behind the feeling of being creeped out knowing that NSA analysts are out there gathering your every digital communication and sharing the best naked pictures they happen to come across with their office buddies.