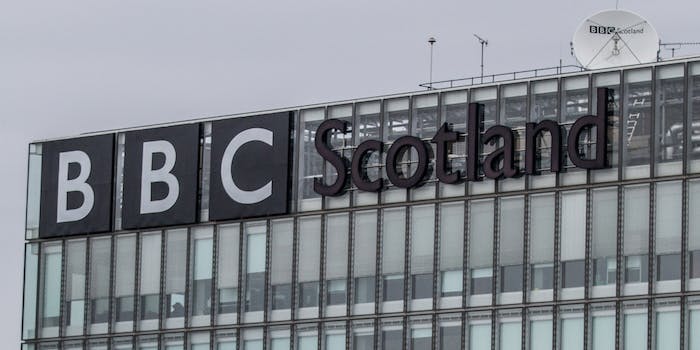 The BBC is receiving some pretty intense criticism from supporters of Scottish independence.

The BBC, the U.K.’s impartial broadcasting network, is being accused of bias against the campaign for Scottish independence.

Scottish voters will decide next week whether their country should leave the United Kingdom. With polls currently too close to call, people from both sides of the debate are growing more concerned about media coverage. In this case, the BBC is receiving some pretty intense criticism from supporters of Scottish independence.

On Thursday night, BBC News aired a segment from a press conference with Scotland’s First Minister and independence campaign leader, Alex Salmond. In this report, BBC political editor Nick Robinson is seen asking a question, which Robinson then says Salmond failed to answer.

The problem is, Salmond did answer the question, and many people feel that the BBC report was purposefully misleading.

In the original seven-minute exchange, Robinson asks Salmond a two-part question about the future of Scottish banking. According to a recent BBC report, a source from within the U.K. Treasury claims that the Royal Bank of Scotland would move its headquarters to London if Scotland voted for independence.

Salmond spoke on this topic at length, saying that the fallout from this type of relocation would be negligible. He went on to imply that the BBC should be investigated for airing what he described as “market-sensitive” information from within the Treasury.

The scene that aired on BBC News was a little different. An edited clip from the press conference showed Robinson asking, “Why should a Scottish voter believe you, a politician, against men who are responsible for billions of pounds of profits?” before stating in a voiceover that Salmond “didn’t answer” the question.

Many viewers picked up on this discrepancy, and took to Twitter to accuse the BBC of weighting its coverage against Salmond. This added fuel to the existing accusations that the BBC holds an anti-independence bias, a serious issue for a broadcaster that is obliged to be completely impartial.

More than 60,000 people have now signed a petition demanding an inquiry into BBC coverage of the Scottish independence referendum. Around 25,000 of those signatures showed up in the past day, along with a more specific petition asking for Robinson to be suspended for allegedly breaching the BBC’s charter of impartiality. A lot of the complaints on social media cite Robinson’s history with the Conservative party as a reason why he might be biased against Scottish independence.

Four hours after the original broadcast, Robinson tweeted to say that he meant Salmond hadn’t answered part of his question satisfactorily, not that he hadn’t answered at all.

To all tweeting about me saying that @AlexSalmond did not answer me : He DID answer re RBS but did NOT re why trust him not company bosses

Complex statements are regularly edited down into soundbites for TV news. The issue here is that the BBC’s editing may have made it look like Salmond ignored a simple question about his trustworthiness as a politician. Also, Salmond’s comments about the BBC were summarized by Robinson as an “attack” on “the reporting of those in what [Salmond] called the ‘metropolitan media’.”

Following complaints lodged by viewers on Thursday and Friday, the BBC responded with a statement saying that Robinson’s report was “balanced and impartial, in line with our editorial guidelines.” The BBC added that Salmond’s answers had been edited and summarized due to their length.

But for the many people who are still adding their names to that BBC bias petition, this statement may not be enough, particularly since Salmond implied during this same press conference that the BBC should be under investigation.