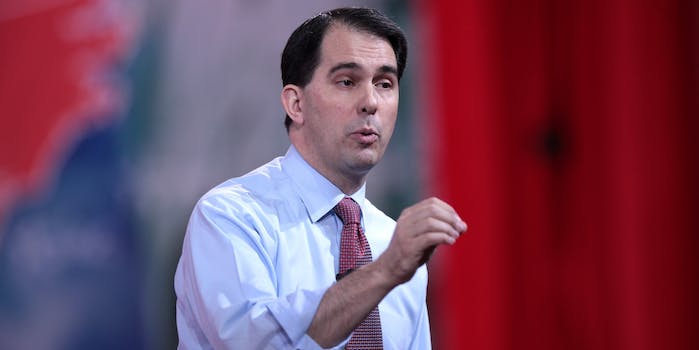 Is this Scott Walker tweet accidentally good for Hillary Clinton?

It all depends on your perspective.

Wisconsin Gov. Scott Walker has long been one of the Democrats’ harshest critics. But he may have just accidentally made one of the strongest arguments for electing Hillary Clinton president.

In a tweet published Tuesday afternoon, Walker, who dropped out of the Republican primary in the hopes of consolidating a vote against eventual nominee Donald Trump, made a pitch to voters who feel poor, scorned, and alienated from President Barack Obama‘s America.

If you like the past 8 years, vote @HillaryClinton. pic.twitter.com/cQEtIgPsEz

Problem is, most Americans like Obama—who has been one of Clinton’s most prominent supporters—making Walker’s tweet sound like a good reason to vote for Clinton for millions of people. An average of more than 52 percent approve of Obama’s job as president, up from a 50 percent disapproval rating in January. The unemployment rate remains steady at 5 percent, down from a high of around 10 percent throughout the latter half of 2009 and most of 2010, following the Great Recession. And the U.S. economy overall recently had its best growth of the past two years.

But that only tells one side of the story. Obama’s approval rating means that 48 percent of Americans think he did a bad job as president. Some 50 million Americans live in economically distressed communities, according to a February report from the Economic Innovation Group, which also found 55 percent of those people did not have jobs. Real median household income in 2015 remained 1.6 percent lower than in 2007, before the economic collapse. And an average of 63.1 percent of Americans think the U.S. is headed down the wrong track.