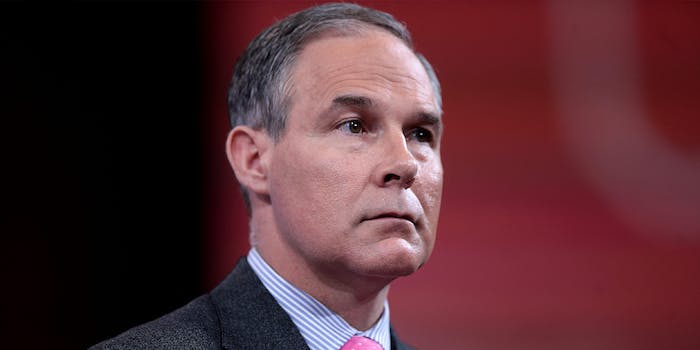 Pruitt likes to travel in style, but he doesn't like to explain why.

The Environmental Protection Agency (EPA) has reportedly spent tens of thousands of dollars on the travel decisions of administrator Scott Pruitt.

Pruitt is often booked on first or business-class flights, but federal regulations mandate that government employees like Pruitt should take every measure to select the least expensive method of travel that suits their security needs and gets them to their appointed location on time.

The documents claim that the increased flight costs are due to “unspecified security concerns,” the newspaper reported. Pruitt has round-the-clock security detail that costs taxpayers about $2 million per year in salaries, according to CNN. The EPA reportedly receives numerous threats to Pruitt’s safety, with 32 percent of received threats directed at Pruitt, compared with 9 percent of direct threats against his predecessor Gina McCarthy.

Pruitt’s travel and security spending are much larger than previous administrators Lisa Jackson and McCarthy.

According to travel vouchers, that means spending $2,903.56 on a trip to Colorado Springs to speak at the Heritage Foundation’s Resource Bank meeting last May, and $1,980.34 to head to Tulsa for a tour of the Brainerd Chemical Co. a week later.

While Pruitt does occasionally travel coach, the Post reports, he often stays at luxury hotels and chooses to fly Delta, despite the fact that the government contracts with certain airlines to fly specific routes. The EPA also declines to publicize Pruitt’s trips, again citing security concerns and breaking with previous administrations. Last June, Pruitt and his staff flew to New York from Cincinnati on a military jet to the tune of $36,068.50 to catch a flight to Rome. That flight cost $7,003.52 for Pruitt alone. According to the Post, Pruitt was joined by his aides and security detail for private tours of the Vatican before traveling to Bologna to meet with other environmental ministers.

You can read all of the Washington Post‘s report here. The Daily Dot has been collecting records of travel and costs of President Donald Trump‘s cabinet.