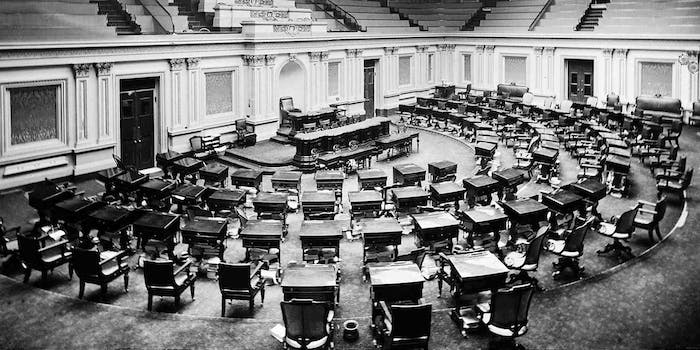 "The next two months will be much harder because of this first misstep. I should have understood that more clearly."

On Tuesday, former Senator Scott Brown came one step closer to getting his old job back. And that may have major implications for the Internet-centric push to zap big money out of U.S. politics.

In 2010, the Republican shocked Washington by winning the Massachusetts senate seat previously held by liberal icon Ted Kennedy, only to lose that seat to newly minted liberal icon Elizabeth Warren two years later. Brown, who apparently really wants to return to a governing body with a 15 percent approval rating, has traveled across the border to neighboring New Hampshire in an attempt to become the newest senator from the Granite State.

Earlier this week, Brown decisively took the Republican Party’s nomination in an electoral contest that marked the end of the 2014 primary season. The result wasn’t a surprise; polls throughout the race showed Brown to be a favorite. However, his campaign spent the last few days before the vote talking about something it probably assumed would never become a major issue—what Brown did after he was voted out of office.

This shift in focus was triggered by the actions of MayDay PAC, an organization created by Harvard Law Professor Lawrence Lessig that aims to do whatever it can to get the pervasive power of money out of Washington. Lessig, who is best known for his visionary contributions toward rethinking how copyright and intellectual property rights are applied online, created MayDay PAC to support candidates from both sides of the aisle who pledge to end the legal structures permitting so-caled super PACs to spend virtually unlimited amounts of money influencing elections.

MayDay PAC is literally the super PAC to end all super PACs, and one of first candidates it decided to throw its weight behind was Jim Rubens. A former Republican state senator who was also vying for the GOP nod for the New Hampshire senate seat, Rubens earned MayDay’s backing by advocating for a system of small dollar donations in federal elections to replace the current big-spending corporate free-for-all.

While MayDay’s $2 million moneybomb in support of Rubens’s campaign wasn’t enough to put it over the top, a mailer sent by MayDay shortly before the election still sent the Brown campaign into a state of apoplexy.

The mailer called Brown a lobbyist, ‟who sold his influence to a D.C. lobbying firm.”

After getting booted out of the Senate, Brown went to work for the Washington, D.C.-based law and lobbying shop Nixon Peabody. A press release sent out by the firm when Brown joined last year noted that Brown would ‟focus his practice on business and governmental affairs as they relate to the financial services industry as well as on commercial real estate matters.”

On Sunday, Lessig received a letter from the Brown campaign calling the PAC’s labeling of Brown as lobbyist to be a ‟flat-out lie”:

Scott Brown is not nor has he ever been a lobbyist. Ever. We call on you to immediately cease and desist with the mailer in question, to you use one of your various media appearances as a purported authority on ethics to retract your falsehood.

The people of New Hampshire can see through your cynical and throughly distasteful political attacks, but that doesn’t excuse you from peddling total falsehoods. If you fail to immediately cease the mailer in questions, we are leaving our legal options on the table.

The letter accused Lessig of violating the honor code of Harvard University, where he serves as the faculty director of the school’s Center of Ethics.

Representatives from Brown’s campaign did not respond to a request for information about whether or not the former senator’s time at Nixon Peabody involved reaching out to his former colleagues in the Senate or giving his new colleagues advice on how to more effectively exert their influence on what, at this point, can only ironically be called the world’s greatest deliberative body.

In a blog post about the letter, Lessig conceded that, yes, Brown was never technically a registered lobbyist (a fact that conservative news outlet Breitbart immediately jumped on), but insisted that that quibbling over semantics on what does or does not constitute a lobbyist is precisely what’s wrong with Washington.

In his 2011 book Republic Lost, which largely serves as the philosophical groundwork for MayDay PAC, Lessig argues that one of the biggest problems facing the American political system is the revolving door spinning between the top levels of government and private sector firms looking to leverage the personal connections lawmakers made during their time in Congress.

In 1974, only 3 percent of senators became lobbyists after leaving office. Now, more than half take the high-paying plunge.

However, not everyone who engages in lobbying is officially labeled as a lobbyist because, as per the terms of the 1995 Lobbying Disclosure Act, lobbyists only have to register with the federal government if the earn more than $3,000 annually from lobbying, have been the recipient of multiple lobbying contracts, and spend over 20 percent of them time lobbying for a single client during a three month period.

It’s a rule that a 2012 New York Times op-ed insisted was completely ineffective:

Only a person who has met all three tests must register as a lobbyist. So a former lawmaker who has many lobbying contacts and makes $1 million a year lobbying but has no single client who takes up more than 20 percent of his time would not be considered a lobbyist.

Of course, many prominent influence-peddlers do not actually meet with lawmakers or federal officials themselves. They provide “strategic advice” on how to navigate Washington and whom to see, while other members of their firms do the face-to-face lobbying work.

It isn’t just that the current rules for who has to register as a lobbyist are arguably inadequate to catch many of the people actually doing lobbying: Due to almost non-existent enforcement from the Department of Justice there almost never any consequences for who lobby while failing to register.

The issue, as reporter Lee Fang argued in a must-read investigation published in The Nation earlier this year, is that people doing the work of lobbying are increasingly neglecting to register as lobbyists. In recent years, the number of registered lobbyists has dropped precipitously.

Fang notes that the number of registered lobbyists dropped to 12,281 in 2013, the smallest since 2002. However, American University Professor James Thurber, who has studied how government works for over three decades, insists that an accurate count of the number of bodies actually in the Washington lobbying industry is probably more like 100,000.

The reason the vast majority of the people doing the work of lobbying Congress, along with other federal agencies, avoid registration is that there are almost no upsides to doing so other than assuaging the fears of corporate clients who may be especially concerned about following the spirit of the law, rather then just the letter.

Under a policy established by President Obama shortly after he first took office, registered lobbyists aren’t allowed to work in a presidential administration in areas related to their lobbying work for at least two years, unless they’ve received a special exemption to do so.

In addition, the 2007 Honest Leadership and Open Government Act prohibits senators from lobbying Congress for two years after leaving government service, but that really only applies to registered lobbyists. Since the salary a lobbyist is able to command is directly proportional to the number of personal connections he or she has with those still working in positions of power, registering would only serve as a hinderance—especially when violators of the law are rarely punished.

After Eric Cantor was unexpectedly upset in a primary against the comparatively unknown David Brat, the former Senate Minority Leader announced he was taking a multi-million dollar job at Wall Street investment bank Moelis & Co..

Mr. Moelis said he is hiring Mr. Cantor for his “judgment and experience” and ability to open doors—and not just for help navigating regulatory and political waters in Washington. Still, expertise in such matters is likely to be valuable given how heavily they can weigh on the minds of corporate executives contemplating deals.

While this job description may sound a lot like a what a lobbyist would do, especially when Cantor himself has no direct prior experience working in the financial industry, there’s no indication whether or not Cantor will ultimately register as a lobbyist because, no matter what he does for the firm, his registration status likely won’t actually matter.

Lessig knows all this. He knows the line between a registered lobbyist and an unregistered one is largely immaterial—it’s still someone selling their access to the highest echelons of power, whether their business card says ‟registered lobbyist” or something considerably more vague, like ‟government affairs specialist.”

It’s why, instead of backing down, Lessig immediately challenged Brown to a debate over the role lobbyists play in American politics. And, despite initial tough talk from the Brown campaign, they never responded to Lessig’s debate request and, instead, sailed on to a victory in the Tuesday’s primary.

Rubens’s loss to Brown was a significant setback to MayDay and, in a post-mortem blog entry, Lessig admitted that assuming a former senator with national name recognition was beatable with a few million dollars of outside money was a miscalculation:

That given the cost, and given the hyper-partisan environment of 2014, I think it was a mistake for me to push so hard to enter this race. With basically 3 weeks, starting at 9 points, up against two former senators, the climb was too steep. The next two months will be much harder because of this first misstep. I should have understood that more clearly.

However, Lessig added the exit polling showed that MayDay’s efforts were able to help push Rubens to a 25 percent share of the vote, up from 9 percent in July, and that over one-third of voters said that reducing the influence of money in politics played a factor in their vote.

And, if nothing else, MayDay’s involvement in the race shows that it’s possible to change the conversation towards the large-scale, systematic problems facing American democracy—at least for a few days.