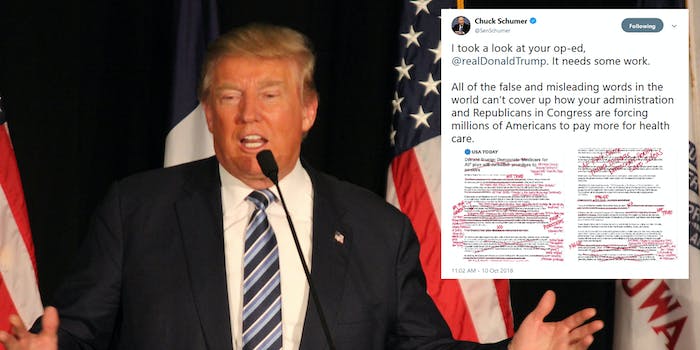 The internet had a lot to say.

Senate Minority Leader Chuck Schumer (D-N.Y.) publicly edited an op-ed penned by President Donald Trump in USA Today about Democrats plans for “Medicare for all” claiming it was “false and misleading.”

Schumer made his edits in red and posted it on Twitter.

The op-ed by Trump, published on Wednesday, slams Democrats for proposing a “government-run, single-payer health care system” and calls the party “radical socialists who want to model America’s economy after Venezuela.”

“Republicans believe that a Medicare program that was created for seniors and paid for by seniors their entire lives should always be protected and preserved,” the president wrote. “I am committed to resolutely defending Medicare and Social Security from the radical socialist plans of the Democrats. For the sake of our country, our prosperity, our seniors and all Americans — this is a fight we must win.”

Schumer took offense to the claims and decided to push back on Twitter.

“I took a look at your op-ed, @realDonaldTrump. It needs some work. All of the false and misleading words in the world can’t cover up how your administration and Republicans in Congress are forcing millions of Americans to pay more for health care,” the Senate minority leader wrote.

I took a look at your op-ed, @realDonaldTrump. It needs some work.

All of the false and misleading words in the world can’t cover up how your administration and Republicans in Congress are forcing millions of Americans to pay more for health care. pic.twitter.com/SjFjonVBef

The marks, in red, cover most of the op-ed, with Schumer writing that things were “not true” and “no” above much of Trump’s writing.

Other people just joked about the whole ordeal.

The op-ed was also fact-checked by numerous news outlets.

PolitiFact found a number of the president’s claims to be suspect, with one expert calling Trump’s assertion that the “Medicare for all” plan would “take away benefits that seniors have paid for their entire lives” a “horrible mischaracterization of the proposal.”

Many people online were not fond of the fact that Trump was able to publish the op-ed, while others praised Schumer’s edits.

Wow!!!! My eighth grade English Comp papers didn't have that amount of red ink on them. https://t.co/b2n0x7Z6Sn

Appealing to the youths by, um, line editing? https://t.co/4nMrcYgEPW

Should have been corrected in blue because it’s coming. https://t.co/TT0gguVDVt

This redline is more or less impossible to read. Why is he so bad at messaging? https://t.co/fdJTOlnRcI

It’s perhaps the fiercest Schumer’s fought back against Trump all year.