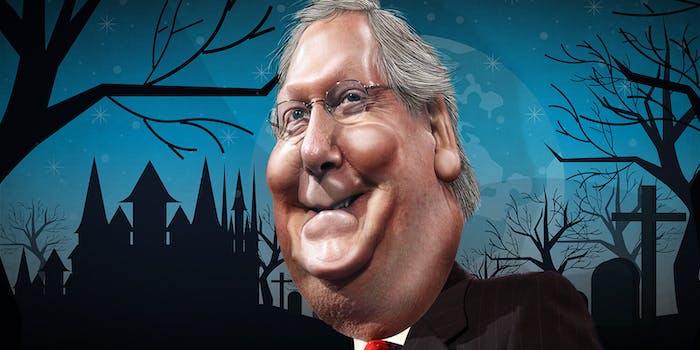 A list of the ghoulish ways Republicans are acting this Halloween

It’s easy to spot most horror movie villains, but unlike Freddy Kreuger, Dracula and Jason, Republican monsters hide in plain sight. Fancy suits, Rolexes, and professional coiffures instead of the more conspicuous cape, fang, and mask. Rather than chainsaw, cleaver, and spell, their weapons are legislation, sound bites, and press releases. Those manicured hands and permanent grins may make them look harmless, but that’s just a disguise.

Here are some of the most terrifying, horrifying, frightening ways that Republicans are celebrating Halloween.

Putting kids in cages: President Donald Trump’s family separation policy for people apprehended at the border horrified the nation and resulted in the kind of human rights violations that America has long spoken out against. Thousands of children were cleaved from their families and stuffed into overcrowded, dangerous, and unsanitary concentration camps where several died.

In a rare move, the administration caved to public pressure and announced an end to the policy in June 2018. But in a predictable twist, that wasn’t actually true. In July, CBS and other outlets reported that the administration was quietly exploiting a narrow exception to separate families; at the time, at least 700 more families had been separated since the policy supposedly was revoked.

They should try being 9 years old and waking up under an aluminum foil blanket on a concrete floor and not knowing where your parents are. #TheRealHorrorMovie #FamilySeparation https://t.co/93lRzqYVqi

Gutting the Endangered Species Act: Earth is in the midst of a sixth mass extinction. It’s possible that 30-50% of species will be extinct by mid-century. Unlike previous extinctions, this one is avoidable. It’s caused by human population growth and greed in the form of habitat loss, pollution and carbon emissions. So what’s a Republican to do? Why, gut the Endangered Species Act, of course.

In August, the Trump administration proposed a broad-ranging reduction of endangered species’ protections. The proposed changes will allow regulators to consider how much money stands to be made by drilling in a coral reef or building a golf course in habitat like the Hawaiian forest home of the critically endangered ‘akiapōlā‘au bird. It makes it easier than ever to remove a species from the protected list and it largely requires regulators to ignore climate change when considering whether to protect a species. The administration is also considering removing ESA protections for Key Deer, even though there are only 600 remaining in the wild.

Twenty states are currently suing to stop the changes.

20 states + NYC are suing the #Trump administration for rollbacks to the nation’s bedrock conservation law. Trump’s revised rules appear to clear the way for new mining, oil and gas drilling, and development in areas where protected species live.https://t.co/P137Mmrq7Y

Annihilating freedom of choice: Winning control of the House, Senate and White House in 2016 seriously encouraged Republicans to indulge their longtime obsession with outlawing abortion. One of their guys—the freakin’ health director for the state of Missouri—even had a spreadsheet that tracked the menstrual cycles of women who received healthcare from Planned Parenthood. Seriously.

Not only are many states proposing restricting abortion to the point that it would be effectively unobtainable, they’re also considering imprisoning women and doctors (Georgia has murder charges on the table, even for women who miscarry), and, in a move one might charitably call counterintuitive, making it even harder to get birth control.

Elsewhere efforts are underway to otherwise force women being forced to give birth, even in cases of rape or incest (looking at you, South Carolina), or if carrying to term would pose a serious, even deadly, risk to her life and that of the fetus.

Adding Bible study to the public school curriculum: There’s nothing monstrous about practicing and studying religion. Using public dollars to indoctrinate children into two of the world’s thousands of faiths—Judaism and Christianity—as lawmakers in conservative-controlled Florida, Indiana, Missouri, North Dakota, Virginia, and West Virginia have proposed, is another matter entirely.

Critics point out that separation of church and state means that public dollars can’t be used to promote a religion, which these Bible study courses would arguably do. It bears mention that there are numerous institutions in every town in America that offer Bible study for free once or twice a week.

So far no one has proposed adding Quran literacy classes, Scientology courses, or Hindu study.

Suppressing the heck out of the vote: Politicians really don’t like it when people vote against them. Rather than reform their positions and policies to be more inclusive and garner the support of the majority, the GOP prefers to suppress, suppress, suppress.

They will do anything to win; from enacting voter ID laws that make it harder for people—disproportionately poor, racial and ethnic minorities, and disabled people—to vote; using Operation RedMap to dilute the minority vote (i.e. ‘bleaching,’ ‘cracking,’ and ‘packing’); to “use it or lose it” laws that purge voters from the rolls if they don’t vote within a specific number of elections.

The House Oversight Committee is investigating Georgia Republicans for massive voter suppression in 2018 in an effort that reportedly included closing and moving polling places, purging voters, and intentionally using compromised electronic voting machines that changed votes for Democrats to votes for Republicans. That hasn’t stopped them from planning to purge 330,000 voters—reportedly mostly people of color and young people—from the rolls this year.

Florida and North Carolina are also embroiled in battles over their alleged efforts to suppress the vote.

Blocking gun law reform: Even as specter of the once all-powerful NRA shrinks, Senate Republicans led by Majority Leader Mitch McConnell (R-Ky.) continue to hold the line for one of their favorite campaign donors. The horrors of mass shootings and vast majority of Americans who support reform have thus been insufficient to convince McConnell to bring gun reforms passed by the House to a vote.

As the death tally climbs and protests mount, McConnell and his co-conspirators prefer to focus on a far more important number: millions of dollars of campaign donations from their pals in the gun lobby.

1/ Gun violence is an ongoing problem in #Philly & across America.

So the House passed universal background checks (#HR8) to keep guns out of the wrong hands.

Fact check: 246 days ago, the House passed background checks on all gun sales.

Senate Majority Leader Mitch McConnell has had 246 days to call a vote on life-saving gun safety reform and hasn’t. https://t.co/spi7QI9rC6

This is by no means a comprehensive list of all the nefarious acts being conducted and contemplated by Republicans. They’re considering marine life-murdering seismic testing in the Atlantic, are trying to revoke states’ rights to keep their air clean, and are in the midst of a spend, baby, spend spree that, coupled with that tax cut for billionaires, ensures that future generations of Americans will be paying off the national debt for decades, all while cutting safety nets like food stamps and welfare. They are also eviscerating the Affordable Care Act and making it easier for companies to stop providing healthcare benefits to employees.