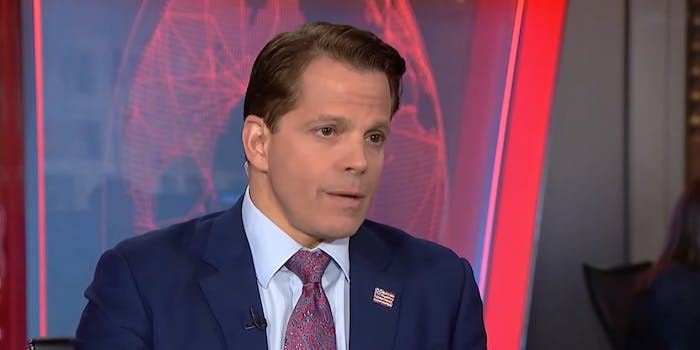 'I should have said he is the largest proportioned President since William Howard Taft.'

Anthony Scaramucci, the former communications director for President Donald Trump, said on Friday that Twitter temporarily suspended him for calling his former boss fat in a tweet.

Scaramucci shared a screenshot of an email he was sent by the social media giant with Axios, adding that he believed his most recent tweet was the reason for the lock-out.

The tweet was in response to Trump fat-shaming someone at a rally in New Hampshire who he thought was a protester but ended up being a supporter. The president said the man had a “serious weight problem” and should “start exercising.”

Scaramucci, who has been in the midst of a public falling out with the president in recent weeks, decided to comment on Trump’s remarks.

“Said the fattest President since William Howard Taft . . .” he wrote in a quote-retweet of an Axios video of the president’s remarks.

That tweet, Scaramucci told Axios, is the reason he believes he’s been slapped with a temporary suspension.

“I think it is related to ‘fat shaming’ President Trump,” he said, according to Axios. “I should have said he is the largest proportioned President since William Howard Taft. My bad.”

. @Scaramucci says Twitter has temporarily suspended his account. “I think it is related to ‘fat shaming’ President Trump,” the president’s former communications director says. “I should have said he is the largest proportioned President since William Howard Taft. My bad.” pic.twitter.com/0nnH9rtjxg

“If a tweet was found to be in violation of our rules, and has yet to be deleted by the person who tweeted it, we will hide it behind a notice,” the company told the news outlet. “The account will remain locked until the Tweet is removed.”