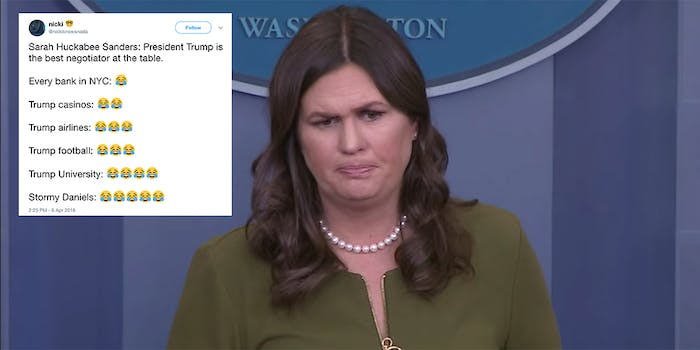 'If he's the ONLY negotiator at the table. Then, yes.'

The internet got a good laugh on Friday when White House press secretary Sarah Huckabee Sanders called President Donald Trump “the best negotiator at the table,” implying he has the upper hand in an ongoing trade tiff with China.

Trump has declared his intentions to tax Chinese steel and aluminum, and China has retaliated with tariffs on soy and other products.

Press Sec. Sanders tells @jonkarl that Pres. Trump "absolutely" still believes trade wars are easy to win "if he is in charge of those negotiations…he's the best negotiator at the table." https://t.co/XQ7uJkSKKT pic.twitter.com/c0Je4qVInO

People on Twitter wanted to know what table, exactly, Sanders was referring to. And how many negotiators are sitting there?

Sarah Says: In talks with China, Trump will be "…the best negotiator at the table." The problem is, China won't be sitting at the kids' table. #ifhermouthismoving

Sanders touted Trump’s hand in the yet-unresolved North American Free Trade Agreement as an illustration of his negotiating skills. But people had other examples in mind.

Let’s see how far the “great negotiator” (aka Stable Genius) has gotten us with his promise of a “terrific” replacement for ACA, Gun Control (if they are unstable you just go in and take their guns!), DACA and then, Infrastructure Week. Now he’s working his magic with Tariffs!

It’s yet to be seen how Donald “Best Negotiator” Trump will handle the China tariff situation. Lest the internet forget, this is the same man who once co-authored a book called The Art of the Deal. But given his history, plenty of people are lacking faith in Trump’s diplomacy skills.

At least they’re getting a hearty chuckle out of it.