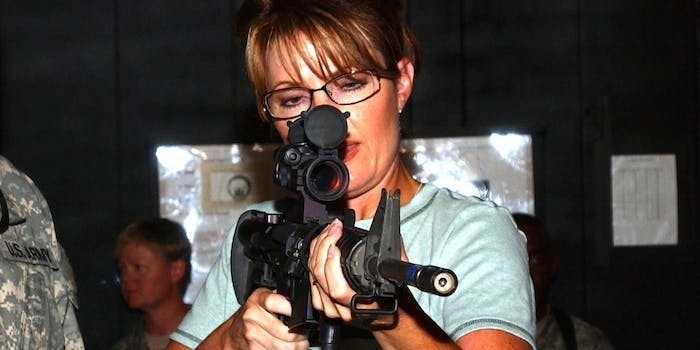 Sarah Palin: ‘Waterboarding is how we baptize terrorists’

Does anyone still listen to Sarah Palin? Apparently so.

At one wince-inducing point, she told the rapturous crowd that if she were in charge, America’s enemies would know that “waterboarding is how we baptize terrorists.” Waterboarding is a controversial “enhanced interrogation technique” that has been used by the CIA in the past as a dubious method for extracting information from suspected terrorists.

Palin also railed against gun-free schools, calling them “stupid on steroids,” and asserted that claiming gun stores can be considered an accomplice to crime is akin to saying “that fork made me fat.”

Throughout her speech, there was a strong “us-vs-them” rhetoric, with the ex-governor frequently emphasising “they” and “them” when referring to the “Washington liberals” and the “establishment.”

Palin decried what she views as “more and more attempts to strip away our Second Amendment rights,” which are “enshrined in America’s most perfect blueprint”—and that if gun control succeeds, “the rest of the Constitution is not far behind.”

The Eighth Amendment to the U.S. Constitution formally outlaws the use of “cruel and unusual punishments.” In 2009, Sarah Palin’s former presidential running mate, John McCain, described waterboarding (having been tortured himself) as “a mock execution and thus an exquisite form of torture… prohibited by American laws and values.”

The NRA conference has also made headlines this year for offering children free membership of the organisation, as well as the opportunity for kids to win “a high-powered rifle or shotgun.”