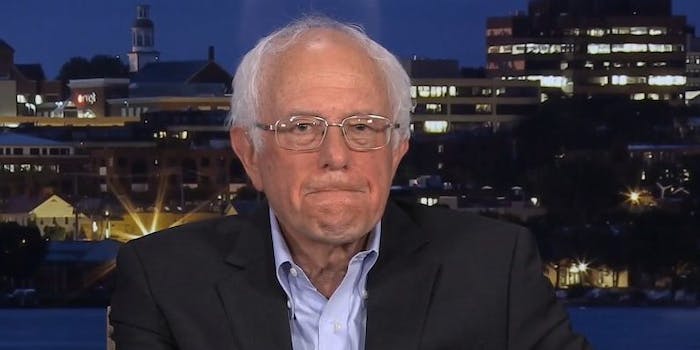 He also wants peace in the Middle East.

Sen. Bernie Sanders (I-Vt.) has a message for Israel: If you don’t let members of Congress visit, then you should stop taking America’s money.

Yesterday, Israel announced that Reps. Rashida Tlaib (D-Mich.) and Ilhan Omar (D-Minn.) were prohibited from traveling there next week based on their support for the pro-Palestinian BDS (Boycott, Divestment, Sanctions) Movement.

A month earlier, Israeli Ambassador to the United States Ron Dermer said they were permitted to visit. Yesterday’s sudden shift came less than an hour after the president tweeted that it would “show great weakness if Israel” allowed them to come.

Over the years, members of Congress, including Sanders, have frequently traveled to Israel, one of the United States’ closest allies. Since Trump’s election, the Israeli-Palestinian conflict has increasingly been the source of debate and controversy in American politics.

This latest development sparked a wave of bipartisan recriminations and a smattering of support from Trump’s surrogates. Trump, meanwhile, continued to trash the congresswomen.

It is disgusting that a bigot like Trump is attacking @RashidaTlaib and @IlhanMN in this way. Opposing Netanyahu's policies is not “hating the Jewish people.” We must stand together against those who promote hatred and racism in Israel, Palestine, the U.S. and everywhere. https://t.co/Sq8FikcumK

By attempting to travel to Israel with an organization that includes members who support terrorism against Israel, Reps. Omar & Tlaib made it clear the only intention of their visit was to spew hate & advocate for policies that would actively undermine the Jewish state of Israel.

I disagree 100% with Reps. Tlaib & Omar on #Israel & am the author of the #AntiBDS bill we passed in the Senate

But denying them entry into #Israel is a mistake.

Being blocked is what they really hoped for all along in order to bolster their attacks against the Jewish state.

Israel Prime Minister Benjamin Netanyahu later claimed that their trip’s itinerary proved that Tlaib and Omar’s sole purpose was to harm Israel. The nation said that Tlaib, who is Palestinian-American, could visit her grandmother on the West Bank on a humanitarian visa, provided she did not proclaim her support for BDS. Tlaib declined.

On an appearance on MSNBC’s All In with Chris Hayes last night, Sanders took Israel to task.

“Well, I wish I could tell you that I am shocked. I am not. We have a president who tragically is a racist, is a xenophobe and is a religious bigot,” said Sanders, who is running for president. “But the idea that a member of the United States Congress cannot visit a nation, which by the way we support to the tune of billions and billions of dollars, is an outrage.”

“If he doesn’t want members to visit, maybe he can respectfully decline the billions of dollars we give to Israel,” Sanders continued, referring to Netanyahu.

Sanders stressed that the visits are so that Congress can “see what’s going on” in the Middle Eastern nation. Guest host Ali Velshi pointed out that Israel has received more than $140 billion of aid from the U.S. over the years and $3 billion last year.

“All that I am saying is that we need a Middle East policy which is even-handed, which protects the independence and safety of Israel but also that shows respect to the Palestinian people, many of whom in Gaza and elsewhere are suffering incredibly,” said Sanders, who is Jewish.

He then urged leadership from two sides to “sit down, work out differences and create peace in that region.”