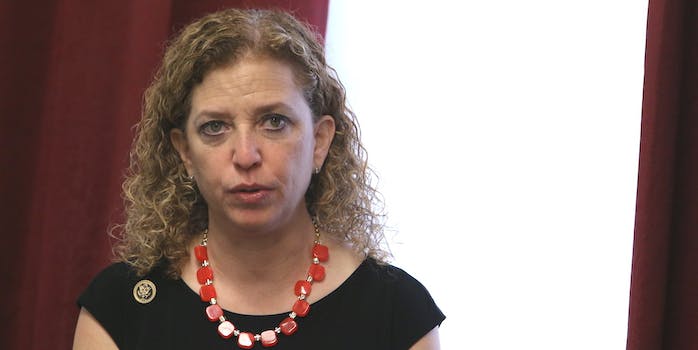 Sen. Bernie Sanders began fundraising on Sunday for the primary opponent of Rep. Debbie Wasserman Schultz’s (D-Fla.), the Democratic National Committee chair whom he has accused of showing favoritism toward Hillary Clinton.

Sanders had previously endorsed Tim Canova, a Florida law professor who says he was inspired to run against Wasserman Schultz due to her support of the Trans-Pacific Partnership (TPP), a regional trade accord negotiated by the Obama administration and 11 Pacific Rim nations.

The TPP has virtually no support among the 2016 presidential candidates, including Donald Trump, who portrayed it in March as a coffin for the U.S. auto industry.

On Sunday, a fundraising email from the Sanders campaign depicted Canova as a kindred populist. “His campaign is funded like ours by lots of people giving small amounts of money,” the email reads. The campaign went on to state that Canova shares Sanders’ interest in “taking on Wall Street, making tuition free at public colleges, and reforming our broken campaign finance system.”

The campaign asked for a donation intended to be split between the Bernie 2016 and Tim Canova for Congress campaigns, claiming that it would help “elect progressives up and down the ballot”.

Speaking on Sunday morning to Jake Tapper of CNN, Sanders had some harsh words for the current DNC chair. He said that—“with all due respect”—Wasserman Schultz should not expect to be reappointed if he were elected president. “I clearly favor her opponent,” he said, speaking of Canova, whose views, he added, “are much closer to mine that Wasserman Schultz’s.”

In a statement, Wasserman Schultz said she was dedicated to remaining neutral in the Democratic primary, despite the endorsement by Sanders of her opponent. “I look forward to working together with [Sanders] for Democratic victories in the fall,” she said.

Sanders’ alliance with Canova appears to have sprung from escalating tensions between Sanders and Democratic party leaders, whom he has accused of partiality.

Last week, the DNC reportedly offered Sanders seats on a key convention platform committee in the form of concession, hoping to stave off unruly delegate behavior that might elevate the appearance of a fractured Democratic base at the July convention.