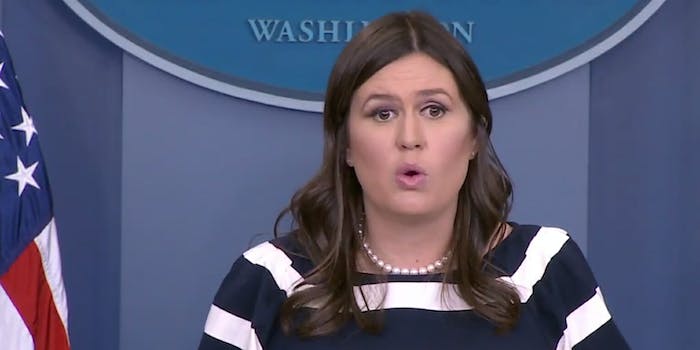 That is some spin.

White House Press Secretary Sarah Huckabee Sanders defended President Donald Trump when asked about the payments between AT&T and the president’s longtime personal lawyer Michael Cohen as the “definition of draining the swamp” on Friday afternoon.

Sanders echoed the president’s promise to change politics when she was asked about the telecommunications giant paying Cohen $600,000 to consult on a potential merger between the company and Time Warner.

AT&T apologized for making the payment, saying it was a “big mistake” to hire him as a political consultant. Sanders, however, used the situation to praise the president.

“I think that this further proves that the President is not going to be influenced by special interests,” Sanders said. “This is actually the definition of draining the swamp, something the president talked about repeatedly during the campaign. For anything beyond that I would direct you to the president’s outside counsel.”

She added that possible merger shows Trump would not be “influenced by any outside special interests.”

Sarah Sanders on whether Trump thinks it was a mistake for AT&T and Novartis to work with Michael Cohen: "This further proves the president is not going to be influenced by special interests. This is the definition of draining the swamp." pic.twitter.com/fWnMizINws

Later in the press briefing when pressed on Cohen’s payments, Sanders said Trump would “do what he finds in the best interest of Americans across the country.”

AT&T paid $600,000 to Cohen’s company, Essential Consultants, to advise on the potential merger. Trump has pushed back against the merger, and the Justice Department filed an antitrust lawsuit in an attempt to block it.

The merger would give the company control of several media properties including CNN, HBO, Warner Bros. and other networks.