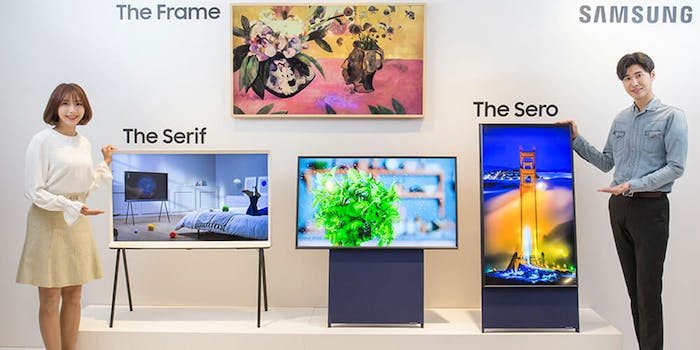 Samsung made a vertical TV so that you can watch Instagram

Technology company Samsung is set to release a new TV that can be flipped in order to watch vertical content just like a cell phone.

Known as “the Sero,” the 43-inch QLED display can be quickly rotated to let users watch videos from vertical platforms such as Snapchat, Instagram, and TikTok.

As noted by Engadget, the decision to build the Sero, which will be made available in Korea, came in response to the popularity of smartphones among millennials.

The Sero is designed to connect directly to a user’s phone, letting anyone broadcast their favorite vertical apps to the big screen. The TV also comes equipped with a 4.1-channel 60-watt speaker.

It remains unclear whether the TV will become available outside of the Korean market. The Sero is slated to cost roughly 1.9 million won, or $1,630, when released late next month.

Whether or not millennials will be enticed by a TV that can change from landscape to portrait mode remains unknown.

The Sero could, however, further cement vertical content as an accepted format. Despite vertical video being the bane of the Internet’s existence, its unlikely to disappear anytime soon as the world’s most popular apps continue to encourage its use.