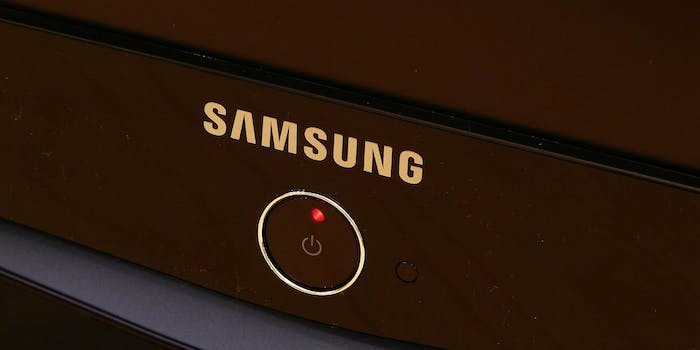 Photo via Lali Masriera/Flickr (CC BY 2.0)

Samsung may have rigged its TVs to fool energy-consumption tests

Volkswagen might not be the only company cheating on its inspections. Lab tests suggest that some Samsung TVs are using less energy during testing than they do in the real world.

The culprit is Samsung’s motion lighting, a feature that adjusts screen brightness in response to the content on the screen. Experts think that it might be producing better energy efficiency results in testing than the TVs achieve in people’s living rooms.

Samsung vehemently denies the allegation that it built its TVs to behave this way.

“This is not a setting that only activates during compliance testing,” a company spokesperson told the Guardian. “On the contrary, it is an ‘out of the box’ setting, which reduces power whenever video motion is detected.”

The spokesperson said that there is “no comparison” between the effects of motion lighting and Volkswagen’s controversial “defeat device,” which suppressed emissions levels during testing.

ComplianTV could not confirm the cause of the energy-consumption discrepancy; it could only show that a difference existed between testing and real-world environments. It plans to conduct additional testing to determine whether Samsung and other manufacturers are attempting to skirt energy requirements.

The European Commission plans to further investigate allegations of TV and automobile cheating, in addition to tightening restrictions on energy-efficiency regulations and banning defeat devices.

H/T the Guardian | Photo via Lali Masriera/Flickr (CC BY 2.0)