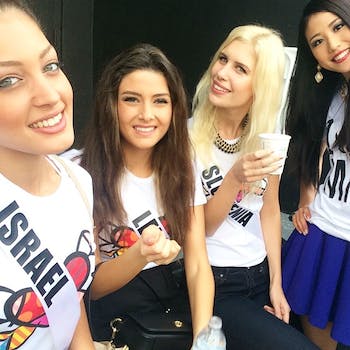 The conflict between the two nations even made its way to the Miss Universe pageant.

Miss Lebanon Saly Greige is defending herself after critics claimed she took a selfie with Miss Israel during the Miss Universe pageant.

The Miss Universe contestants are currently in Miami preparing for the pageant, which airs Jan. 25, and when they aren’t competing or making promotional content, they may have a moment or two to relax and keep their fans entertained with behind-the-scenes photos. Last week, Miss Israel Doron Matalon posted a seemingly innocent photo of herself, Greige, and contestants from Slovenia and Japan.

To all my supporters and Lebanese citizens, I would like to thank you indeed for your continuous support of Miss Lebanon at the Miss Universe contest… The truth behind the photo, since the first day of my arrival to participate to Miss universe,I was very cautious to avoid being in any photo or communication with Miss isreal, who tried several times to take a photo with me. I was having a photo with Miss Japan, Miss Slovenia, suddenly Miss Israel jumped in and took a selfie, and uploaded it on her social media. This is what happened and I hope to have your full support in the Miss Universe contest

Matalon, on the other hand, didn’t back down from the photo and lamented that the hostile relationship between Israel and Lebanon couldn’t be put aside for a few weeks while women from around the world gathered together in one place.

“It doesn’t surprise me, but it makes me sad,” she wrote.