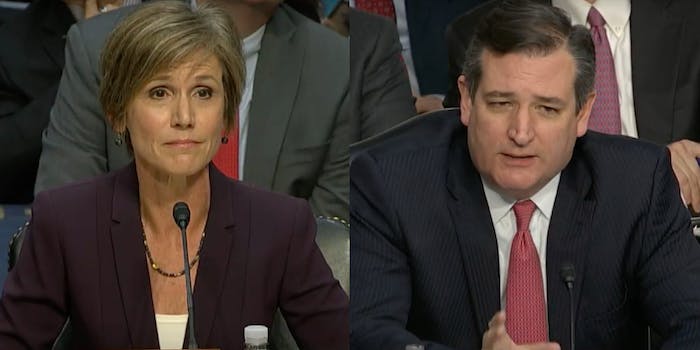 Yates had some quick responses to Ted Cruz's rebuke of her handling on President Trump's controversial travel ban.

The exchange, which was immediately pounced upon by Twitter users, came during a Senate Judiciary subcommittee hearing that was convened to learn more about the Department of Justice and other intelligence agencies investigation into former Trump national security adviser Michael Flynn.

Cruz seemed to take issue with Yates not agreeing with the lawfulness of Trump’s executive order that would bar entry to the country from several majority Muslim countries. He indicated that the president can impose limitations on people entering the country based on national security grounds, citing a provision in the Immigration and Nationality Act (INA), which grants the president authority to bar “any class” of foreigner from entering the United States.

Yates defended her decision—which ultimately caused her to be fired by Trump—by quoting another part of the statute Cruz was referencing that entirely negated the senator’s apparent attempt to make Yates look foolish: “[N]o person shall receive preference or be discriminated against in issuance of a visa because of race, nationality, or place of birth.”

Ted Cruz tries “I know statutes” with Yates on the travel ban. Yates claps back and whips out a statute of her own. pic.twitter.com/NRjg54mIwy

Cruz argued that in late January, the Office of Legal Counsel—part of the Department of Justice—issued a legal decision approving the executive order “with respect to form and legality.”

Yates said the Office of Legal Counsel looks at “the face” of the document and makes a determination as to whether there is “some set of circumstances under which some portion of that [executive order] would be enforceable.”

“In this particular instance, particularly where we were talking about a fundamental issue of religious freedom—not the interpretation of some arcane statute—but religious freedom, it was appropriate for us to look at the intent behind the president’s actions,” she said.

Yates tried to finish her answer about Trump’s intent behind the executive order before being cut off by Cruz for his “very brief” question.

“I’m not, but I’m also not aware of a situation where the Office of Legal Counsel was advised not to tell the Attorney General about it until after it was over.”

— Jordon Brown Snarker of Tweets First of His Name (@THEJordonBrown) May 8, 2017

In my darkest hours I will think of Sally Yates destroying Ted Cruz on national television, and it will sustain me.