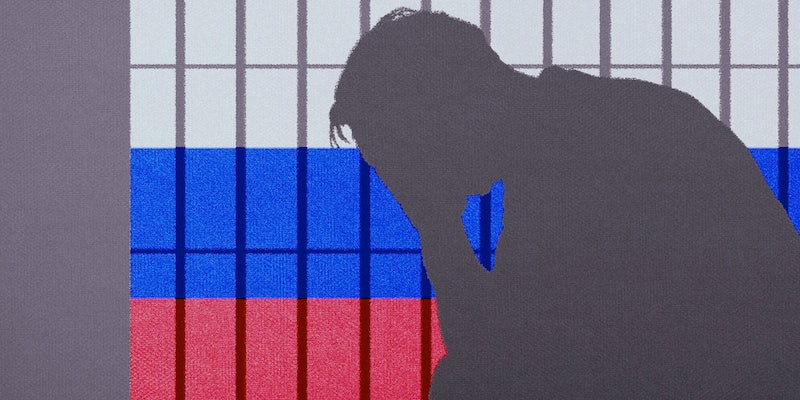 ‘Russian Ebola’: How a journalist is tracking mysterious deaths in police custody

When the government doesn't put out an official number, journalists step up.

While working for Russian opposition journalist Oleg Kashin, Berezina pulled openly available government data and verified it with the press office of Russia’s Ministry of Internal Affairs. It was true: Every month, between nine and 29 people die in police departments across Russia. They died in detention facilities, police stations, and drunk tanks. A total of 197 died during 2015, most of them without charge or trial.

She turned her findings into a project called “Russian Ebola,” named after how Kashin himself defined the “strange epidemic” of Russia. “I collected these statistics the same way I did it for kashin.guru: searched for ‘police, dead,’ link, date, city,” she explained to the Daily Dot. “In several weeks, I was frightened by the figures I got.”

“In several weeks, I was frightened by the figures I got.”

Berezina’s findings reveal seasonal and geographical trends. For example, 29 deaths in police departments in May–the highest figure for the whole year–could be the consequence of the country’s long May holidays, which can lead to days of hard drinking. Deaths in Moscow were less common than in provincial areas, like the cities of Kirov or Tver, or the region of Transbaikal, which borders Mongolia and China. Starting this year, she’s going to issue quarterly reports.

The most common phrase used in official police reports to indicate the reason of death is “unexpected feeling unwell.” Suicide, heart attack, or intoxication also come up frequently. Fewer than a third of cases come to trial, and the police officers involved are almost never found guilty. In one case, on Nov. 11, 2015, 37-year-old Dmitry Demidov, a detained prison informant, was found dead of a gunshot wound in a St. Petersburg jail. Officer Andrey Artemiev initially claimed it had been a suicide, though the federal Investigative Committee has since reclassified the case from negligence of duties to homicide.

“The statistics are shameful, sad, and hopeless,” Sergey Kurt-Adzhiev, a journalist and human rights advocate from the southwestern city of Samara, told the Daily Dot. “Before, violations of the law and deaths in the police stations were sensational [news], but since the 1990s, everything has changed.”

“I always say: If you see a rabid dog or a cop, go to the other side of the street,” he added.

Some police, however, argue the problem is blown out of proportion.

“It’s a common opinion: ‘If someone died in the police station, he was killed,’” a senior sergeant of the Samara police department, who asked not to be named, told the Daily Dot. “I personally can remember just one case like this. A drug addict who shot heroin and drank alcohol was taken to the department and died there. Things were immediately up and running in media—he was beaten, murdered, pushed, hit, though we had never laid a finger on him.”

“Years ago,” he said, “people had respect for us.”

In October, a 5-month-old Tadjik boy named Umarali Nazarov died in the Admiralteyskiy district of St. Petersburg. The entire country was outraged. He had been taken from his mother when she was detained for violating a law regulating the country’s migrants, taken to the station, and then to a hospital, where he died. A week later, the activist group Rights For Everybody picketed in front of the police building.

“From the moment a person is placed at the police station, he is actually rightless,” Natalia Sivokhina, a Rights For Everybody activist, said. “He is alone with the walls and the policemen. What happens next depends on the squad which is on duty at this time. Before the courtroom, he can be beaten or separated from the child. This problem must be solved systematically, but now the system is vicious.”

“I always say: If you see a rabid dog or a cop, go to the other side of the street.”

Shortly after launching Russian Ebola, Berezina said in her first interview that what she wants the most is a response from the relevant government bodies. What she expected the least is the Center for Combating Extremism (aka Center E) calling her in for questioning. “They wanted to know who [I was] and why I count deaths,” she said. “And it seems like, after looking at me, they just realized that there is no point to be afraid of some little girl.” So far, she’s seen no consequences from her project—neither negative ones from Center E, nor changes from the Ministry of Internal Affairs.

The journalist doesn’t believe that the existence of Russian Ebola affects the situation anyhow—at least not yet; the police just don’t care, she says.

“The website was created in order for people [to] think by themselves,” she said. “I haven’t ever said that everything is bad in Russian police forces. Maybe there is nothing bad at all—but then why [do] people keep dying?

“That is the main question Russian Ebola project should answer.”