Russia is secretly hiring an army of Internet trolls

Now you know where those comments come from.

If you’ve ever spent much time on news website comment sections—be it Reddit, The Guardian’s “Comment Is Free” or Huffington Post—you’ll know that all too frequently they can contain angry arguments, with opposing thinkers going at it tooth and nail. Now BuzzFeed is reporting that professional bloggers and commenters in the employ of the Kremlin are working round the clock to defend their nation’s honor and sow dissent abroad—even as Russia viciously clamps down on bloggers at home.

The tone of the documents seen by BuzzFeed are reminiscent of any innocuous consumer product’s digital marketing strategy—in stark contrast to the shocking reality of what they advocate. “Like any brand formed by popular opinion, Russia has its supporters (‘brand advocates’) and its opponents,” read strategy documents created by project member Svetlana Boiko; “the main problem is that in the foreign internet community, the ratio of supporters and opponents of Russia is about 20/80 respectively.”

The response to this negativity is a comprehensive “astroturfing” campaign to infiltrate the comment sections of top American news outlets, and attempt to sway public opinion thusly. “Astrotufing,” a play on the term “grassroots,” is the maligned practice of artificially and misleadingly manufacturing an apparent authentic movement or campaign for a particular cause or product. In this instance, that product is the autocratic Russian state.

Fox News, Huffington Post, The Blaze, Politico and WorldNetDaily are allegedly among the online news outlets targeted in the propaganda program. According to documents seen by BuzzFeed, the astroturfing campaign is led by a company called the Internet Research Agency, spearheaded by one Igor Osadchy. However, when confronted, Osadchy disavowed ever having worked for the Internet Research Agency (despite an apparent $35,000 allowance for his salary in the documents), and called into question the validity of the leaked documents, declaring them an “unsuccessful provocation”.

The Internet Research Forum allegedly employs more than 600 people with a projected budget of around $10 million dollars for 2014—but nonetheless is only one of many such organisations dedicated to funding “pro-Kremlin comment trolls.”

BuzzFeed has been unable to definitively prove the authenticity of the leaks themselves, saying that to do so, “by the nature of the subject, [is] not easy. The project’s cost, scale, and awkward implementation have led many observers in Russia to doubt, however,that it could have come about in any other way.”

Each commenter is allegedly required to post at least 50 times a day, whilst bloggers should run at least six Facebook profiles that each post three times daily and take part in discussions in groups at least twice daily. By the end of the first month, BuzzFeed reports, “they are expected to have won 500 subscribers and get at least five posts on each item a day.”

Vasily Gatov, blogger and former senior figure at Russia’s state newswire, described the supposed rationale behind the program: “Someone sold the thought that the Western media, which specifically have to align their interests with their audience, won’t be able to ignore saturated pro-Russian campaigns and will have to change the tone of their Russia coverage to placate their angry readers.”

Amusingly, the comments on BuzzFeed’s article seem to confirm the documents. The responses were immediate and vitriolic, alternately casting aspersions as to the validity of the documents and claiming that the U.S. does likewise. Almost all of these comments were made by new, anonymous commenters with no prior activity on the site. 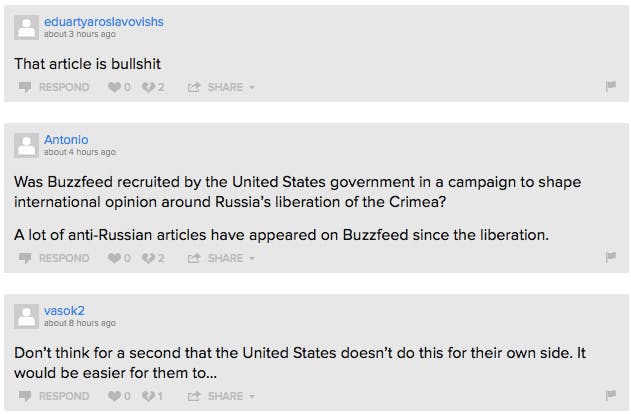 BuzzFeed is reporting a dramatic uptick in activity of these “comment trolls” since Russia invaded the Ukrainian Crimean peninsula in late February 2014. The Russian government is also in the process of cracking down on dissent within its own borders, forcing all bloggers with more than 3,000 followers to register as an official news outlet, and thus fall under State control.

In 2013, non-profit Freedom House described Russia’s press freedoms as “repressive… stifl[ing] legitimate news reporting,” with an overall Press Freedom score (with 0 being best and 100 being worst) of 81.