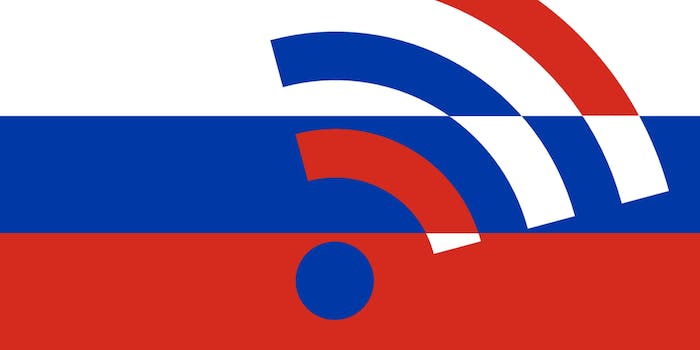 Did Russia just ban anonymous use of public Wi-Fi?

The new decree is vague, but unsettling.

Online anonymity, widely regarded as a fundamental component of Internet freedom, just got a bit harder in Russia.

Russian Prime Minister Dmitry Medvedev has signed a decree requiring citizens to sign up with a passport or government identification card in order to use public Wi-Fi, Russian paper Izvestia reported.

Like Russia’s infamous “blogger’s law,” which requires anyone who maintains a blog of moderate popularity to register with the government, it’s not exactly clear how this would be enforced. Initially, Russian media reported that the Wi-Fi registration decree would apply broadly, including public parks and restaurants. But on Friday, the Moscow Times quoted the city’s head of information and technology, Artyom Yermolayev, as saying the decree would only apply to the country’s roughly 20,000 “collective access points” to get Wi-Fi, which apparently are primarily post offices, and that public parks and restaurants wouldn’t be affected.

“Authorities appear to be retreating in recent statements about where this regulation will and won’t be enforced—public spots like bus stations, the metro system, and parks—but it’s a threat to human rights to have a law like this on the books,” Peter Micek, Senior Policy Counsel for the Internet freedom group Access, told the Daily Dot.

Possibly in response to the confusion and outrage surrounding the decree, Medvedev’s press secretary, Natalya Timakova, said Friday that it might be reworded, according to Russia’s ITAR-TASS news agency.