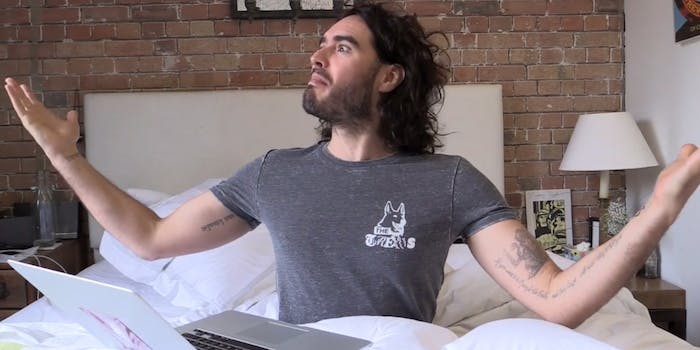 'We have to examine our cultural climate.'

Comedian Russell Brand has never been one to shy away from controversy — in fact, he seems to run toward it. If there’s a heated debate about a topic, you can bet Brand has an opinion on it. This week, Brand spoke out about differences between media coverage of the terrorist shooting suspect in Copenhagen and the man who murdered three young Muslims, execution-style, in Chapel Hill, North Carolina.

In a video recorded in his bed, Brand points out that the media treats the Copenhagen terrorist as a representative of Muslim culture at large, whereas the alleged Chapel Hill murderer, Craig Stephen Hicks, is labeled a “disturbed individual.”

“If we acknowledge that the Chapel Hill murders were a hate crime, then we have to examine our cultural climate,” Brand says from the comfort of his plush bed.

The actor also takes issue with the film American Sniper’s simplification of Middle Eastern society, as well as with the media’s treatment of the three students murdered in Chapel Hill as Muslims first and Americans second.

Hicks was indicted on Monday by a grand jury on three counts of first-degree murder, and the FBI has opened a hate-crimes investigation. Brand thinks it’s ludicrous to argue that the triple murder was anything but a hate crime—and not, as some allege, a “parking dispute.”