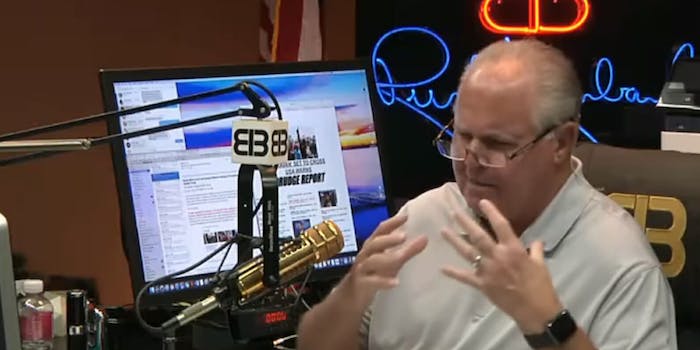 He has a lot to say about it.

Conservative radio host Rush Limbaugh apparently doesn’t like the investigation into whether President Donald Trump‘s campaign worked with Russia to meddle in the 2016 election.

While the investigation is quietly continuing under the helm of Special Counsel Robert Mueller, one portion of it, the president’s “pee tape,” has been thrust into the conversation in recent weeks. The video, which allegedly shows Trump paying prostitutes to pee on a bed in Russia, was front-and-center in memos written by former FBI Director James Comey.

Limbaugh, speaking on his radio show on Thursday, decided to wade into the pee tape conversation and appears convinced that someone is going to release a fabricated version of it, according to audio released by Media Matters for America.

“That bed right there, that might be the one Obama and Michelle slept in that the prostitutes are peeing on. Well, what’s to stop them from doing that? They haven’t stopped faking and making up—what do you think the Steele dossier is? It’s fake made up evidence. It isn’t evidence. It’s fake made up allegations, and it is the center of all of this.”

Later in his show, the host said if a pee tape that “somebody tries to tell us is legit” was released, it would be used to back up the ongoing Russia investigation.

Earlier in the week, Limbaugh even elaborated on it on his website. In a post published on Wednesday, Limbaugh said “they” will release the pee tape and envisioned “a couple of prostitutes” working with a “fictional law firm” and going on television to talk about it.

The radio host’s comments come on the heels both of Comey’s memos referencing Trump’s obsession with the pee tape, as well as rampant speculation about its existence that came after a Bloomberg report poked holes in the president’s claim that he did not stay overnight in Russia during the time when the tape was said to have been created.

In an interview with Fox & Friends, the president finally confirmed Bloomberg’s report.