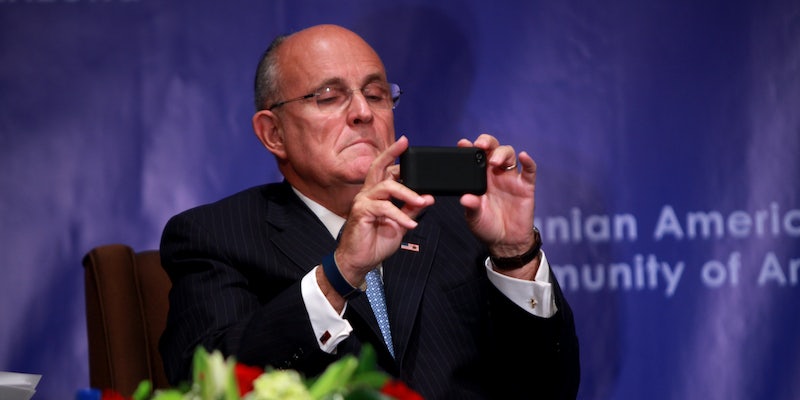 Rudy Giuliani is furious about getting pranked on Twitter, still doesn’t get how it worked

Yesterday, Rudy Giuliani, President Donald Trump’s lawyer, got hit with an excellent prank. He didn’t put spaces in one of tweets, and the beginning and end of two of his sentences wound up with the same structure as a legitimate URL.

Dot in is a domain extension, no different than dot com, dot gov, or dot edu. So when Giuliani neglected to put a space when writing G-20.In, a hyperlink was generated. Someone bought that domain and had it redirect to a site that makes fun of Donald Trump.

Tonight, Rudy Giuliani tweeted his anger over the prank, and proved he has no idea how it happened.

Twitter allowed someone to invade my text with a disgusting anti-President message. The same thing-period no space-occurred later and it didn’t happen. Don’t tell me they are not committed cardcarrying anti-Trumpers. Time Magazine also may fit that description. FAIRNESS PLEASE

“Twitter allowed someone to invade my text with a disgusting anti-President message,” he wrote. “The same thing-period no space-occurred later and it didn’t happen. Don’t tell me they are not committed cardcarrying anti-Trumpers. Time Magazine also may fit that description. FAIRNESS PLEASE.”

The reason Giuliani’s “same thing-period no space-occurred later” didn’t become a URL is because there he wrote “Helsinki.Either.”

Dot either is not a domain extension recognized by the Internet Corporation for Assigned Names and Numbers. So it did not become an active URL.

Before he took office, Trump named Giuliani a cybersecurity adviser.