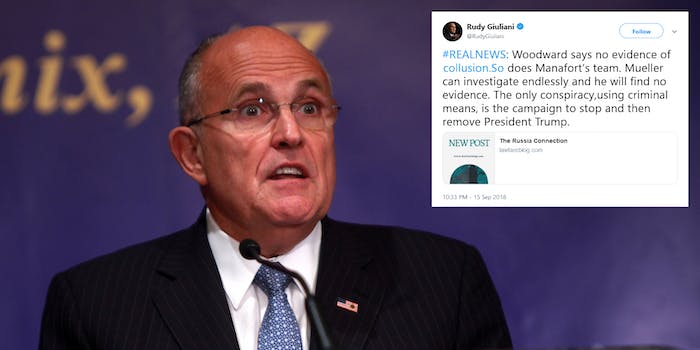 Rudy Giuliani, who is representing President Donald Trump amid Special Counsel Robert Mueller‘s probe, is having a tough week on Twitter.

Late last week, Giuliani made an inadvertent typo in a tweet blasting Mueller, writing “G-20.In.” By not putting a space next to a period, it became a hyperlink, which some redirected to a website that said “Donald J. Trump is a traitor to our country.”

After getting wind of the hyperlink, the president’s lawyer accused Twitter of being part of a conspiracy, declaring (incorrectly) that the social media website let someone “invade” his tweet.  The mistake was mocked relentlessly, considering the former New York City mayor was tapped to be part of a cybersecurity initiative with Trump.

Now people have spotted another typo in an old Giuliani tweet that has become a trolling hyperlink.

Earlier this year Giuliani tweeted that Mueller would find “no evidence” in his probe and wrote “collusion.So” in the tweet, again forgetting to put a space between two sentences.

That leads to Lawfare, where you can find a list of Russia investigation related stories. And it looks like that one has been hiding in plain sight for a while.

“#REALNEWS: Woodward says no evidence of collusion.So does Manafort’s team. Mueller can investigate endlessly and he will find no evidence. The only conspiracy,using criminal means, is the campaign to stop and then remove President Trump,” his tweet from Sept. 15 reads.

#REALNEWS: Woodward says no evidence of https://t.co/TZAyo1B7QP does Manafort’s team. Mueller can investigate endlessly and he will find no evidence. The only conspiracy,using criminal means, is the campaign to stop and then remove President Trump.

Quinta Jurecic, Lawfare’s managing editor, and Benjamin Wittes, Lawfare’s editor-in-chief, have both denied that the website had anything to do with the hyperlinking.

Clearly, Giuliani needs to learn how to put spaces between sentences.