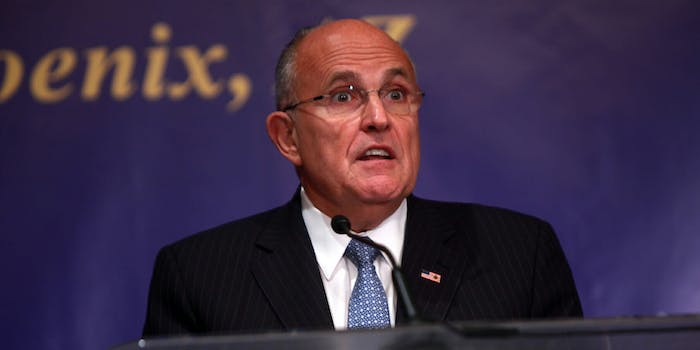 He said he wants to 'negotiate an end' to the Mueller probe.

Rudy Giuliani, a staunch supporter of President Donald Trump, will be joining his legal team with the goal of negotiating “an end” to the ongoing probe by special counsel Robert Mueller, according to a new report.

“I’m doing it because I hope we can negotiate an end to this for the good of the country and because I have high regard for the president and for Bob Mueller,” Giuliani told the newspaper.

The president spoke with Giuliani on Thursday about legal strategy, the Post reports, but did not talk with the news outlet about whether Trump was considering firing Deputy Attorney General Rod Rosenstein, who is overseeing Mueller’s probe intro Russian interference in the 2016 presidential election.

The former mayor of New York City also declined to tell the newspaper whether the president would sit down with Mueller for an interview—something the president has said he’d be open to but that his lawyers seem less keen on letting him do.

This isn’t the first time Trump has considered tapping Giuliani with a high-profile position. There were rumors Giuliani was being considered to lead the FBI after Trump abruptly fired James Comey last year. He also was asked to lead a cybersecurity group to advise the president.