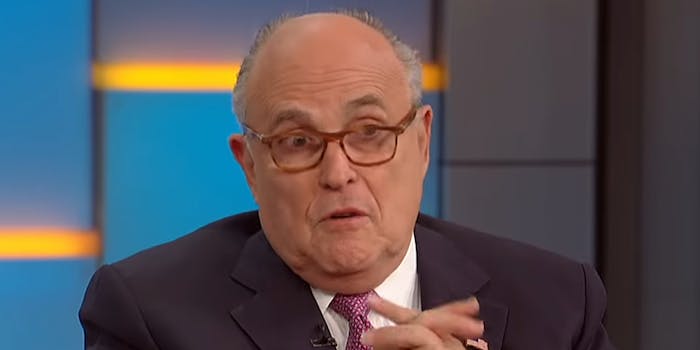 This may be the White House's new argument.

In his Fox & Friends interview, Rudy Giuliani on Monday presented his latest take on the Trump campaign’s possible coordination with the Russian government: Collusion, with a foreign power, to win an election, is “not a crime.”

"I have been sitting here looking in the federal code trying to find collusion as a crime. Collusion is not a crime." 👀 pic.twitter.com/fD1MdS6T29

Numerous legal scholars have chimed in to note that “collusion” is not a charge that could be filed against the president’s associates. Collusion, however, is a catch-all phrase that refers to a whole host of crimes that members of Trump’s campaign could be charged with, namely criminal conspiracy to “to defraud the United States.”

It’s an entirely semantic argument, but it’s notable because it’s one that diverges from the claim the president has frequently been making for several years now. That there is “no collusion.”

There is No Collusion! The Robert Mueller Rigged Witch Hunt, headed now by 17 (increased from 13, including an Obama White House lawyer) Angry Democrats, was started by a fraudulent Dossier, paid for by Crooked Hillary and the DNC. Therefore, the Witch Hunt is an illegal Scam!

There was No Collusion with Russia (except by the Democrats). When will this very expensive Witch Hunt Hoax ever end? So bad for our Country. Is the Special Counsel/Justice Department leaking my lawyers letters to the Fake News Media? Should be looking at Dems corruption instead?

It is one of the president’s favorite phrases to tweet, but with the latest news, that his former fixer Michael Cohen claims the president was aware of the Trump Tower meeting with Russian nationals, it’s one that’s starting to lose credence and could soon change.

Giuliani has, in recent times, foreshadowed the president’s thinking and Twiter feed. Back in June, Giuliani shocked everyone by claiming the president had the ability to pardon himself.

The next day, Trump made the very same claim.

Don’t be shocked if there is a “collusion is not a crime” tweet Tuesday morning from the president.