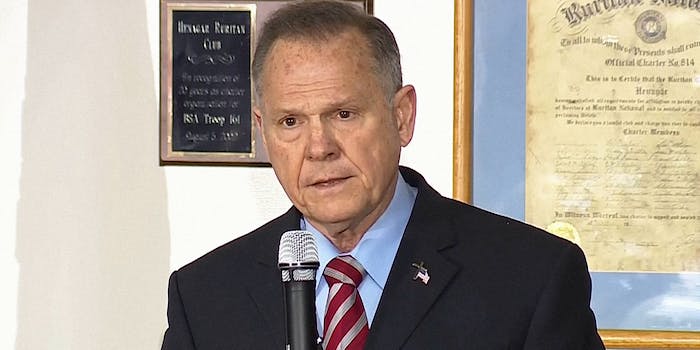 Moore says he passed a polygraph to prove he's not a pedophile.

Roy Moore, who has wavered on whether he would accept his loss in Alabama’s special Senate election, has officially contested the results—and he’s bringing a JFK truther to help him.

Moore filed a request for an injunction Wednesday and asked for a special election to be called, citing what he believes is widespread voted fraud. In his complaint, Moore—whose campaign was upended by allegations of child molestation—also says he successfully passed a polygraph that proves claims of pedophilia against him were false and thus unfairly affected him.

Moore takes special aim at turnout in areas that went against him, citing it as proof that the election results were demonstrably false. His complaint singles out Jefferson County, which includes Birmingham and has a large number of Black voters, as a county that had fraudulent returns.

It’s Moore’s choice of voter data expert though, that is raising eyebrows.

Richard Charnin, who prognosticates elections online, said he saw enough evidence to say that the election could have been swung illegally for Doug Jones. Charnin’s previous claim to fame is that he thinks it’s mathematically proven that John F. Kennedy’s assassination was a conspiracy.

“I mathematically proved a conspiracy to assassinate JFK – and cover it up,” Charnin says on his website. “JFK Calc is a spreadsheet database of suspicious and unnatural witness deaths and other statistical anomalies. Many witnesses who were called to testify in four investigations died unnaturally. The probability is one in trillions – absolute mathematical proof of a conspiracy.“

The request for an injunction also cites a Breitbart article about alleged voter intimidation, including five pages from the comments section.

As proof Moore was being falsely smeared as a pedophile by a Super PAC called Highway 31, the injunction includes a screenshot of a sponsored Facebook post from a page called “Alabama GOP – Grand Old Pedoes.” The post says: “Roy Moore is a pedophile and a child predator. The Alabama GOP needs to replace him NOW!”

Moore filed the request for an injunction just a little over 12 hours before Alabama is set to certify the election. Alabama Secretary of State John Merrill said that Moore’s complaint would not stop him from certifying the election today.