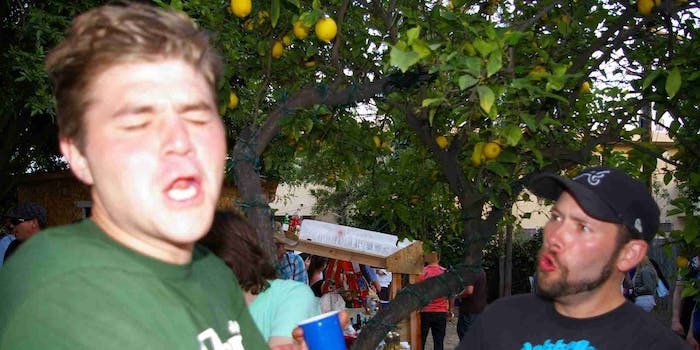 Finally, a place for your crazy uncle.

Tired of arguing with your racist uncle on Facebook yet? An app called Roust wants to pull polarizing political beliefs onto a new platform designed specifically for debate.

It’s always an awkward moment when you come across a particularly egregious or offensive post from a friend or family member. While sites like Facebook and Twitter are built for engagement, many people choose not to lock horns when it comes to politics.

A Pew Research study conducted in 2012 during the throes of a polarizing presidential election found that 73 percent of people have disagreements with viewpoints espoused by their friends; 66 percent ignore those posts while only 28 percent responded. Some even opt to block or hide users with differing viewpoints.

“Facebook has become a place for staying connected with friends, family, co-workers, customers, employees, etc. With social connections as diverse as the ones on Facebook, it is difficult and risky to take a stance on any political, or religious issues,” Roust CEO Mark LaFay told the Daily Dot.

If the third rail of polite conversation is politics and religion, Roust insists you grab that rail and hold on for dear life.

Roust wants to promote engagement by making forbidden topics the crux of communication. If the third rail of polite conversation is politics and religion, Roust insists you grab that rail and hold on for dear life.

“My co-founder, Nathan Frampton wanted a place online to have conversations that were typically relegated to meetings over beers,” LaFay said.

One doesn’t have to wait too long for a new topic of discussion to pop up on their news feed to see the value Roust may provide. Glance back to the week in which the Supreme Court upheld the Affordable Care Act and legalized same-sex marriage, both coming as ongoing debates about the Confederate battle flag and race relations were boiling over. Hell, just wait for Donald Trump to do something else ridiculous (if it’s been more than 15 minutes since he last did, brace yourself because it’s coming) and you’ll immediately want to push every person who posts about him off the cliff of your news feed and into a chasm where they can fight it out.

These are the types of conversations Roust courts, and it makes Roust the only social network that is as valuable to those who use it as those who don’t.

“Moving dialogue off Facebook is more of an ancillary benefit to those that do not like to see it in their news feeds. The real value is for the person in pursuit of a good conversation,” LaFay explained.

“I equate what we are doing to the evolution in online dating sites. You can go to Match.com and check a box that will only match you with Christians. Or, you can go to ChristianMingle.com, because the platform is built specifically for Christian relationships. Yes, you can talk politics on Facebook, but you will have a better experience doing so with Roust, because it’s catered toward an opt-in discussion and therefore sets expectations.”

The social experience one might expect to find from Facebook is still very much intact on Roust. Users sign up, connect or invite friends, and post just about anything—links, photos, videos, statuses, and the like. Users can then engage with “Agree,” “Disagree,” or “Interesting,” buttons, a politicized version of the “Like” button that may satisfy those who have long been craving a “Dislike” option.

Content remains just between connected users unless the poster chooses to make it public. Once the switch is flipped, posts are discoverable by anyone with a Roust account—and then the fun begins.

Of course, it’s also a great way to run into the finest trolls the internet has to offer. Trolls are moths to the flame of political content, and Roust is basically one big tire fire.

It’s difficult, especially in the wake of the Reddit Revolt, not to imagine the worst possible outcomes for interacting on a platform like Roust. It seems there will always be someone to incite, to derail, and to cause issue. LaFay isn’t as worried.

LaFay defines a troll as “someone, often anonymous, that exhibits unproductive behavior in social settings,” though acknowledges there are several definitions that may apply. He believes Roust gives users the tools necessary to deal with any who may arise.

“We will have automated and manual methods for detecting and addressing violations of our terms of service. We will also allow users to notify Roust administrators by flagging content,” he said.

“Dissenting opinions are welcome on Roust. In fact, we hope that people will dive deeply into topics on Roust and challenge each other. However, abusive behavior or illegal activity will not be allowed.”

Still in an invite-only alpha stage, Roust is beginning to gear up for a beta launch in October, just in time for the the political world to become an unavoidable, all-encompassing mass as the 2016 election inches nearer.