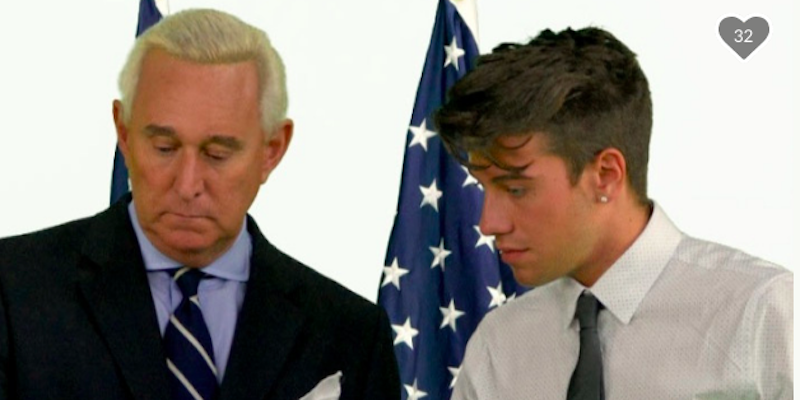 This is definitely written by Stone's grandson.

Stone—whose boasts about his contacts with Julian Assange and Wikileaks made him a person of interest for Robert Mueller—is now the subject of a GoFundMe page that went live on Thursday. The campaign seeks to raise $100,000 to help Stone fight back against the financially crippling Russia probe, and it’s written from his grandson’s point of view.

Let’s investigate some of the finer passages of this campaign. It begins:

My name is Nick Stevens. I am the grandson of the legendary Republican Political Operative and longtime Donald Trump advisor, Roger Stone. While it is very cool to have your grandfather be an important part of history, I can tell you that is not fun for me to see my grandfather and our family under attack.

Stone—sorry, his grandson—estimates his legal bills to exceed $500,000. Apparently, Stone has to scrape together the meager earnings he made from his five books to pay those expenses, all to the detriment of his grandchildren:

I know for a fact that my grandfather’s legal expenses from his lawyers are expected to be more than half a million dollars. My grandfather has even been forced to use the small amount he has made from the sale of the five books he has written that was supposed to help pay for my college education and the college education of my sisters and my cousins—all of Roger Stone’s grandchildren.

The young, embattled lad ends his note by taking a swipe at the “lying” media and implores fans of Stone to do the right thing: