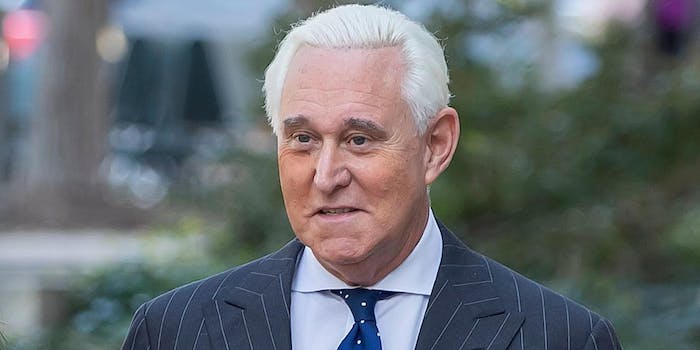 He was convicted on all counts in a quick trial.

Longtime Republican operative Roger Stone, a confidant of President Donald Trump, was convicted Friday in federal court for committing perjury before Congress and tampering with witnesses.

Stone becomes the second high-profile member of Trump’s 2016 campaign to be convicted as part of Robert Mueller’s investigation into the election. Trump’s campaign manager, Paul Manafort, was convicted on money laundering charges.

In response to Stone’s conviction, President Donald Trump said everyone else should go to jail.

So they now convict Roger Stone of lying and want to jail him for many years to come. Well, what about Crooked Hillary, Comey, Strzok, Page, McCabe, Brennan, Clapper, Shifty Schiff, Ohr & Nellie, Steele & all of the others, including even Mueller himself? Didn’t they lie?….

Stone faced seven counts, stemming from his testimony before the House Intelligence Committee, which was also investigating Russian interference in the election. Stone has long-been considered a go-between the Trump campaign and WikiLeaks, which released numerous emails from Hillary Clinton’s campaign.

During the trial, members of Trump’s campaign testified that Stone was their go-between and seemed to have advance knowledge of the WikiLeaks emails, which were stolen by Russia.

Stone was also convicted for threatening a witness, Randy Credico, to back up the version of events he told Congress.