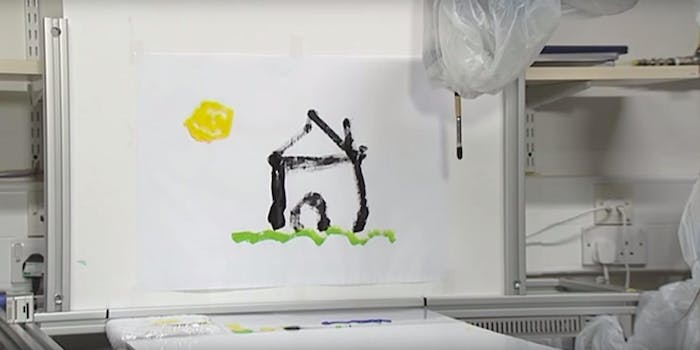 A robot made this painting via a series of eye gestures

Will eye-controlled prosthetics enable the next wave of human productivity?

Using nothing more than blinks and glances, it’s possible to manipulate a robotic arm well enough to paint a simple picture.

Dr. Aldo Faisal of Imperial College London’s Departments of Computing and Bioengineering successfully demonstrated a system that lets a human user control a paintbrush-wielding robot arm using only his or her eyes. He suggests this might lay the foundation for humanity’s future of robot-enabled multitasking.

Using technology that tracks the user’s eyes, the robot is able to receive and understand a variety of commands, even to clean the paintbrush and prepare it with a different color. Once the robot is holding a paint-dabbed brush, it’s apparently pretty intuitive to use. Sabine Dziemian, a postgraduate in Faisal’s research group, says, “If I want to draw a straight line, I look at the start point and the end point, and the robot moves the brush across that line.”

Blinking three times puts the robot in color selection mode, in which it moves the brush over to a variety of pre-dispensed colors. At that point, the user only needs to look at the color he or she wants to use next, and the arm applies the color to the brush.

“Since time immemorial, human imagination has sparked the idea of having additional arms,” says Faisal. He invokes the multiarmed Hindu goddess Shiva, often a symbol of transformation, to suggest we might one day “do the dishes while taking a phone call or [holding] your baby and [preparing] the food at the same time, because you have just that extra pair of hands attached to you.”

The future of robotic prosthetics is developing rapidly. Last month, researchers at Sandia National Laboratories made significant progress in wiring a prosthetic device to the human brain, while leading manufacturer Ossur has developed a battery-powered knee that optimizes movements based on the wearer’s natural gait.

Taken as a whole, these developments could not only help make able-bodied humans more productive, but they also have immediately obvious potential for the disabled, who might use remotely controlled robotic arms to maintain more independence.

“If you’re controlling a third arm, you want it to be natural, seamless, and you don’t want to think about it,” Faisal says.